WASHINGTON (CNN) -- "It is time for Congress to act, and I hope they act in a bipartisan fashion," President Obama said when he went to Peoria, Illnois, on Thursday to argue for his economic stimulus plan. 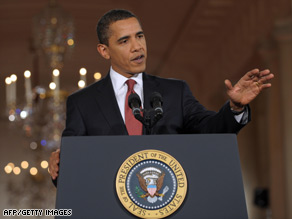 President Obama didn't find much bipartisanship over the stimulus bill or his pick for commerce secretary.

Congress acted. But bipartisan? Not so much.

The plan passed the House of Representatives without a single Republican vote, and got only a token number -- three -- of Republican votes in the Senate.

"All the talk about bipartisanship that we have heard over the last several months went down the drain," House Republican leader John Boehner complained on Friday.

Obama also ran into a wall in his effort to build a bipartisan cabinet when his choice for Secretary of Commerce, Republican Sen. Judd Gregg, withdrew his name from nomination.

"I have found that on issues such as the stimulus package and the census, there are irresolvable conflicts for me," Gregg said on Thursday.

After all, Obama is a popular president -- he had a 76 percent job approval rating in last week's CNN poll conducted by the Opinion Research Corp. He was elected on a promise to bring the country together. And a sense of urgency certainly exists.

Republicans saw the stimulus plan as a challenge to their core principles.

"We aren't interested in growing the size of government," Boehner said on the House floor.

Ideology was a key factor in Gregg's decision to withdraw his Cabinet nomination.

"I'm a fiscal conservative -- as everybody knows, a fairly strong one," Gregg said. "And it just became clear to me that it would be very difficult, day in and day out, to serve in this Cabinet or any Cabinet."

The red-blue divide that has dominated U.S. politics since 1980 is still very much alive in Congress. When Obama allowed House Democrats to shape the initial stimulus plan, it ran right into the buzzsaw of old political divisions.

"They loaded every big government idea of the last 40 years into this bill," Rep. Jeb Hensaring, R-Texas, complained in a statement.

Watch Republicans say why their stimulus plan would work »

Despite Obama's outreach to them, congressional Republicans felt excluded by the Democratic majority. At the same time, some House Democrats balked at the spending cuts made by the Senate in order to get even a modicum of Republican support.

President Obama did everything he could to drum up a public sense of urgency. And it was there.

In the CNN poll, a majority of Americans expressed support for the Senate stimulus bill. But it was a fairly narrow majority -- 54 to 45 percent. At the same time, 55 percent felt the bill contained too much government spending.

One reason for public suspicion: The stimulus plan came only a few months after the deeply unpopular Wall Street bailout. Most Americans resented the fact that the federal government -- indeed, the Bush administration -- was spending hundreds of billions of dollars to bail out the institutions that were responsible for the financial crisis.

Moreover, the bailout doesn't appear to have done much to resolve the crisis. Instead, every day there are stories about captains of finance getting million-dollar bonuses.

In the end, the plan passed. What difference does it make that it got so little Republican support? It's still the law.

Republicans will keep up a chorus of complaint and might try to undo pieces of it. If the economic recovery is slow -- and Obama has warned that it may take years, not months -- the plan will be a continuing issue of partisan controversy. On the other hand, if things start to get better, Republicans could face serious political backlash.

In either case, we will hear those dreaded words, "I told you so."