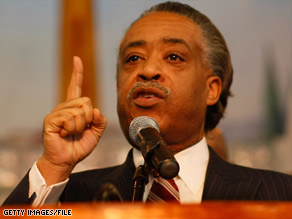 Al Sharpton says he wonders whether the cartoon "is making a less-than-casual inference" to a form of racism.

The artist, Sean Delonas, called Sharpton's reaction "ridiculous," and the newspaper defended its decision to run his cartoon. But other African-American leaders joined Sharpton, who has been the butt of previous Delonas panels, in attacking what they called the cartoon's racial overtones.

"Sean Delonas' cartoon in today's New York Post is insensitive and offensive," National Urban League President Marc Morial said in a statement issued Wednesday afternoon. "Comparing President Obama and his effort to revive the economy in a manner that depicts violence and racist inferences is unacceptable."

The cartoon showed two police officers standing over the body of a chimpanzee they just shot, a reference to this week's mauling of a Connecticut woman by a pet chimp, which police killed after the attack. In the cartoon, one of the officers tells the other, "They'll have to find someone else to write the next stimulus bill." New York Post: See cartoon

The nearly $800 billion stimulus package was the priority for Obama, the first African-American U.S. president, who signed it Tuesday.

"The cartoon in today's New York Post is troubling at best, given the racist attacks throughout history that have made African-Americans synonymous with monkeys," Sharpton said.

Sharpton questioned whether Delonas "is making a less-than-casual inference to this form of racism."

"The Post should at least clarify what point they were trying to make in this cartoon, and reprimand their cartoonist for making inferences that are offensive and divisive at a time the nation struggles to come together to stabilize the economy if, in fact, this was yet another racially charged cartoon," he said.

"Do you really think I'm saying Obama should be shot? I didn't see that in the cartoon," Delonas said.

Col Allan, the Post's editor-in-chief, said the cartoon "is a clear parody of a current news event."

"It broadly mocks Washington's efforts to revive the economy. Again, Al Sharpton reveals himself as nothing more than a publicity opportunist," Allan said in a written statement.

But Sharpton and Morial were not alone in their criticism. Barbara Ciara, president of the National Association of Black Journalists, said the Post showed a "serious lapse in judgment" by running the cartoon.

"To think that the cartoonist and the responsible editors at the paper did not see the racist overtones of the finished product should insult their intelligence," Ciara said in a written statement. "Instead, they celebrate their own lack of perspective and criticize those who call it what it is: tone deaf at best, overtly racist at worst."

Jeff Johnson, a former activist turned Black Entertainment Television host, said provocative cartoons are good, but that "none of this is appropriate on any level."

"The Post ultimately has to answer ... [for] a specific reference to the president of the United States to violence and to his connection to an animal likeness," Johnson said.

"In times past, that depiction of African-Americans has been vigorously condemned as racially offensive," Hutchinson said in a statement issued from his Los Angeles Urban Policy Roundtable. "The cartoon also subtly condones violence. We call on the Post management to issue an immediate apology and a statement that racial insults will not be tolerated by Post writers and cartoonists."