WASHINGTON (CNN) -- Even before President Obama unveiled his home foreclosure plan Wednesday afternoon, some Republicans and political commentators questioned how exactly it would work to stave off a crisis plaguing the country. 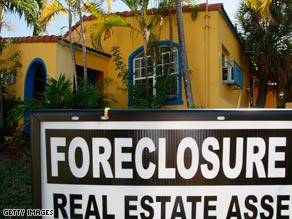 Obama unveiled his $75 billion multipronged plan in Phoenix, Arizona, that seeks to help up to 9 million borrowers suffering from falling home prices and unaffordable monthly payments. The long-awaited foreclosure fix marks a sharp departure from the Bush administration, which relied mainly on having servicers voluntarily modify troubled mortgages.

In the Phoenix area, median home prices have fallen 35 percent in the past year.

Obama, according to the proposed plan, will make it easier for homeowners to afford their monthly payments either by refinancing the mortgages or having their loans modified. The president is vastly broadening the scope of the government rescue by focusing on homeowners who are still current in their payments but at risk of default. Read more on his plan

But there could be fierce resistance among Republicans and some conservative Democrats on Capitol Hill.

Already, top Republicans want several questions answered, an early sign that Obama may once again face stiff opposition to the plan when it comes before Congress. Last week, not one House Republican voted for his economic stimulus package, and only three GOP senators voted for the bill.

The questions found in the letter from Cantor and Boehner to Obama include:

• What will your plan do for the over 90 percent of homeowners who are playing and paying by the rules?

• Does your plan compensate banks for bad mortgages they should have never made in the first place?

• Will individuals who misrepresented their income or assets on their original mortgage application be eligible to get the taxpayer funded assistance under your plan?

• Will you require mortgage servicers to verify income and other eligibility standards before modifying mortgages?

• What will you do to prevent the same mortgages that receive assistance and are modified from going into default three, six or eight months later?

• How do you intend to move forward in the drafting of the legislation and who will author it?

CNN political analyst David Gergen said some aspects of the proposed bill are not going to sit well with conservatives.

"If the administration does move forward with forcing lenders to renegotiate mortgages downward, there are going to be a lot of conservatives who are going ... to say that [this] 'cram-down' is a terrible idea," he said. " What it means is, there will be risk premiums put on future sales of houses, because lenders will say, 'I have got to get a risk premium, in case the government does this to me again.'"

"How will borrowing more money to pay for bad loans solve the problem," Flake said in a press release Wednesday. "President Obama's talk of individual responsibility seems to be at odds with the details of the plan."

Gergen also questioned the fairness of giving help to some mortgage holders that have been delinquent compared to those who are paying on time.

"What do you do about the couple that has been paying their mortgage ... and next door there's another couple that's been delinquent, that's been out spending money, going to Las Vegas, having a lot of fun time," Gergen said. "Is it fair to the first couple when the second couple gets bailed out?"

"Well, we clearly have to do something on housing," Walker said. "I mean, we need to do something to try to be able to help those that are deserving help, but not to reward bad behavior. We have to end the spiraling down of prices."

Obama's response to critics: The plan will not support irresponsible homeowners.

"It will not rescue the unscrupulous or irresponsible by throwing good taxpayer money after bad loans. It will not help speculators who took risky bets on a rising market and bought homes not to live in but to sell," Obama said Wednesday. "It will not reward folks who bought homes they knew from the beginning they would never be able to afford."