WASHINGTON (CNN) -- President Obama met Friday with 85 mayors from across the country to discuss the implementation of city-related funding from the $787 billion stimulus package. 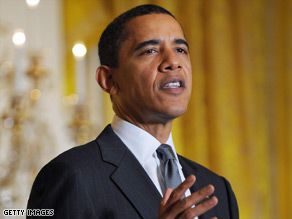 President Obama spoke to a group of mayors from across the country Friday.

"You shouldn't have to succeed despite Washington; you should be succeeding with a hand from Washington, and that's what you're getting now," Obama said at a White House reception.

"This plan does more to lay a new foundation for our cities' growth and opportunity than anything Washington has done in generations."

The economic stimulus package sets aside billions of dollars for highway construction, transit improvements, school modernization and community development block grants. Obama promised that the money would not be squandered or lost to graft and corruption.

"What is required in return is unprecedented responsibility and accountability on all our parts," he said.

"If a federal agency proposes a project that will waste that money, I will not hesitate to call them out on it and put a stop to it," he added.

But, he noted, "I want everyone here to be on notice that if a local government does the same, I will call them out on it as well and use the full power of my office and our administration to stop it."

The mayors have put together a "Ready to Go" report that details 18,750 local infrastructure projects in 779 cities that can be started as soon as the funding is received.

The projects, which represent an investment of $150 billion, would generate 1.6 million jobs in 2009 and 2010, according to the report. They range from creating bridge guard rails in Bessemer, Alabama, to renovating elementary schools in Norfolk, Virginia.

U.S. Conference of Mayors President Manny Diaz -- the mayor of Miami, Florida -- spoke to reporters after the president's speech and praised the White House for their assurance of a speedy process.

"It's refreshing for cities to be able to partner with the White House. We have worked on these issues for many, many years, but there's nothing like having a true partner in the White House that we have today with the president, vice president and an outstanding Cabinet who understands the urban agenda," he said.

Diaz, an independent, said that although there may be diversity amongst the mayors, there is one thing they all have in common: "That is each and every day, we see people in our cities lose their jobs, lose their homes, school systems that continue to fail. ... With the economic recovery plan, we're all ready to go. We've been ready to go for a long time."

Ray Nagin, the Democratic mayor of New Orleans, Louisiana, added that the mayors were given specific details on where the money would go.

"We got specifics from the Cabinet secretaries on how the money will reach us very quickly. ... I made that point that if this stimulus money travels on the same track [as it did for New Orleans after Hurricane Katrina], then there will be lots of unspent dollars at the end of this initiative."

The recession is severely straining cities' ability to meet their financial needs, according to a recent report from the National League of Cities. Eighty-four percent of cities are reporting fiscal difficulties, the highest percentage since the group started doing surveys in 1985.

The fiscal outlook for urban areas is expected to remain tough in 2009. The report found that 92 percent of the cities surveyed expected to have trouble meeting their needs this year.

Sixty-nine percent of cities have instituted hiring freezes or layoffs, and 42 percent are delaying or canceling infrastructure projects.

Cities are seeing their tax revenues decline as property values drop, shopping slows and unemployment rises. On top of that, nearly one in two city finance officers report difficulties in gaining access to credit and/or bond financing.

City finances tend to lag behind the overall economy by 12 to 24 months, the league said. The weakening economic conditions will be felt by cities through 2009 and likely through most of 2010, the league said.