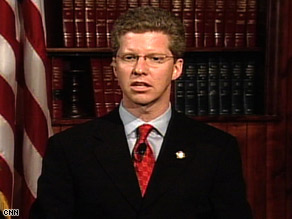 The plan is aimed at "folks who are playing by the rules," Housing Secretary Shaun Donovan says.

President Barack Obama announced the plan Wednesday, saying it will help up to 9 million people keep their homes in a housing market ravaged by foreclosures. But critics, including several leading Republicans and some commentators, said the $75 billion proposal will unfairly help some people at the expense of others.

White House spokesman Robert Gibbs acknowledged Friday that some people who made "bad decisions" might end up getting help under the proposal. But Donovan, Obama's secretary of housing and urban development, told CNN's "State of the Union" on Sunday that "there are no 'flippers,' investor-owners or scammers that are eligible for this program."

"We're going check everybody's income when they come into this program. We're going to make sure that people are paying their bills. And more than anything, we're targeting the folks who are playing by the rules," Donovan said.

The administration's proposal would make it easier for homeowners to afford their monthly payments either by refinancing the mortgages or having their loans modified. And it would vastly broaden the scope of the government rescue by focusing on homeowners who are still current in their payments but at risk of default. Read more about the plan

"About 95 percent of folks are playing by the rules and struggling, but still paying their mortgages. The idea that somebody down the street gets a different system, I think, is ultimately something that's going to undermine a whole lot of other folks with regard to paying their mortgage," Sanford told "Fox News Sunday."

In particular, he singled out a provision that would allow judges to modify or reduce the principal of loans for borrowers in bankruptcy -- an idea Sanford called "incredibly dangerous for the precedent it sets."

But Donovan told CBS's "Face the Nation" that judges already have that power for second homes or vacation homes.

"It's only for people who have one home and are living in it or are in trouble where you can't have a modification of that loan in bankruptcy," he said. But he said the administration would limit the plan to existing loans, not future ones, and considered it a "last resort."

"There seems to be growing consensus that this is an important part of the solution," he said.

About $50 billion of the money would come from the $700 billion financial industry bailout package, a senior administration official said Friday. Nationalized mortgage giants Fannie Mae and Freddie Mac will contribute more than $20 billion to the loan modification program, mainly to subsidize interest rates so troubled borrowers' monthly payments can be lowered to affordable levels.

But those companies are on shaky financial ground themselves and are expected to report billions in losses in the next week or two. To stabilize them, the foreclosure prevention program calls for doubling their lines of credit with the federal government to $200 billion each.

Donovan said 45 percent of home sales in December were "distressed," meaning either sellers were facing foreclosure or the homes were already seized by the bank, driving down home prices further in an already-battered market.

"We've got to make clear, here, that a foreclosure hurts every American," he told CNN.

In releasing his proposal Wednesday, Obama said it would help both responsible homeowners suffering from falling home prices and borrowers either at risk of or already in default. But it does virtually nothing for the unemployed, who often don't have enough income to make any reasonable monthly payment affordable. And since it relies more heavily on lowering interest rates than on reducing principal, it does little for borrowers concerned their homes will never recoup their value.