BEIJING, China (CNN) -- China accused the United States of interfering in its internal affairs and those of other nations on Thursday after the State Department issued a report sharply critical of Beijing's human rights record, state-run media reported. 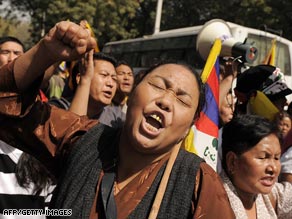 In India on Wednesday Tibetans living in exile protest Chinese rule in Tibet.

"The report turned a blind eye to the efforts and historic achievements China has made in human rights that have been widely recognized by the international community," according to an editorial that appeared on China's Xinhua news agency Web site.

The U.S. State Department issued the report Wednesday in contrast to a much softer tact by the Obama administration when Secretary of State Hillary Clinton visited China last week on her tour of Asia.

"The government of China's human rights record remained poor and worsened in some areas," the report said in reviewing the past year, finding Chinese authorities "committed extrajudicial killings and torture, coerced confessions of prisoners and used forced labor."

During her visit to Beijing, Clinton broached the issue of human rights with Chinese leaders but drew criticism from human rights activists for downplaying the issue's importance in the overall relationship with China.