WASHINGTON (CNN) -- The U.S. envoy for North Korea hopes to visit that nation next week as part of what the Obama administration hopes will be a different relationship between Washington and Pyongyang, senior administration officials told CNN on Thursday. 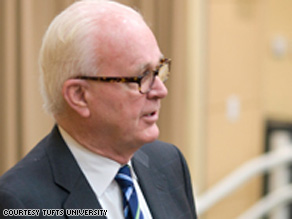 Stephen Bosworth lectures at Tufts University, where he is dean of The Fletcher School of Law and Diplomacy.

Stephen Bosworth will travel first to China, South Korea and Japan -- U.S. partners in the six-party talks aimed at ending North Korea's nuclear program, the officials said. He will be traveling with Sung Kim, director of the State Department's Office of Korean Affairs, who has also acted as a top negotiator.

They said Bosworth will consult with Beijing, Seoul and Tokyo about the status of the nuclear negotiations and determine whether they are approve of him making an overture to Pyongyang.

North Korea is aware of the possibility of a visit, the officials said, but nothing has been scheduled.

Clinton appointed Bosworth as special representative for North Korea policy, overseeing U.S. efforts in the six-party talks. In addition to the United States and North and South Korea, China, Japan and Russia are taking part.

Bosworth, who has visited North Korea several times, served as U.S. ambassador to South Korea from 1997 to 2000 and was executive director of the Korean Peninsula Energy Development Organization from 1995 to 1997. He is now the dean of the Fletcher School of Law and Diplomacy at Tufts University.

Officials say another option is for Bosworth to meet North Korean officials in Beijing. Bosworth just traveled to Pyongyang last month in his capacity as dean of the Fletcher school before being named to the government post.

The possible visit to North Korea comes as the Obama administration weighs greater engagement with the reclusive country. Clinton said before traveling to Asia last week that if North Korea moved ahead with denuclearization, the United States would be prepared to normalize relations and sign a peace treaty on the Korean Peninsula.

Tension between Pyongyang and its neighbor South Korea has increased in recent weeks, with North Korea announcing it would scrap peace agreements with the South, warning of a war on the Korean Peninsula and appearing ready to test a missile capable of hitting the western United States.

U.S. and South Korean officials have said that North Korea seems to be preparing to test-fire its long-range missile, the Taepodong-2. Pyongyang tested one of the missiles in 2006, but it failed 40 seconds after launch. The missile is thought to have an intended range of about 4,200 miles (6,700 kilometers), which -- if true -- could give it the capability of striking Alaska or Hawaii.

Denying intelligence suggesting the missile test, North Korea announced Tuesday it is preparing to launch a satellite from its northeastern coast.

Clinton, who returned from Asia on Sunday after her first overseas trip as secretary of state, called North Korea's nuclear program "the most acute challenge to stability in northeast Asia" and has said there is a "testing period" at present about how diplomacy can move forward.

North Korea leader Kim Jong Il reportedly had a stroke in recent months and some observers claim he may not be fully in charge of the country. Clinton said last week that if Kim is replaced, "even it if is a peaceful succession, then that creates more uncertainty. It may also encourage even more provocative action as a way to delegate power."