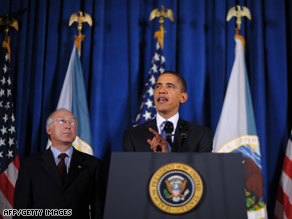 The regulation, issued a few weeks before George W. Bush left office, made it easier for federal agencies to skip consultations with government scientists before launching projects that could affect endangered wildlife.

By overturning the regulation, Obama said during an enthusiastic reception at the Interior Department, he had restored "the scientific process to its rightful place at the heart of the Endangered Species Act, a process undermined by past administrations."

Under the Bush administration rule, there was no need for a federal agency to consult with the U.S. Fish and Wildlife Service or the National Marine Fisheries Services if that agency determined that no harm would come to an endangered species as a result of its project.

But the determination of what "no harm" meant rested with agency bureaucrats instead of scientists.

Obama issued a memorandum that effectively suspends the regulation while ordering a review to determine whether it promotes "the purposes of the [Endangered Species Act]."

"The work of scientists and experts in my administration, including right here in the Interior Department, will be respected," Obama said. "For more than three decades, the Endangered Species Act has successfully protected our nation's most threatened wildlife, and we should be looking for ways to improve it, not weaken it."

"President Obama's announcement will allow [the Endangered Species Act] to do what it was intended: protect our nation's endangered plants and animals," said Andrew Wetzler, director of the Natural Resources Defense Council's Endangered Species Program.

"Reversing the Bush administration's midnight action will restore protections for our last wild places and species."

Obama also helped celebrate the 160th anniversary of the Interior Department on Tuesday.

"Throughout our history, there's been a tension between those who've sought to conserve our natural resources for the benefit of future generations and those who have sought to profit from these resources," he told department employees.

"But I'm here to tell you this is a false choice. With smart, sustainable policies, we can grow our economy today and preserve the environment for ourselves, our children and our grandchildren."

All About Barack Obama • Endangered Species