Will Sebelius be a bipartisan force for Obama?

WASHINGTON (CNN) -- Kansas Gov. Kathleen Sebelius' experience working with both Democrats and Republicans in her home state could be an asset to President Obama as he embarks on an effort at bipartisanship in reforming health care. 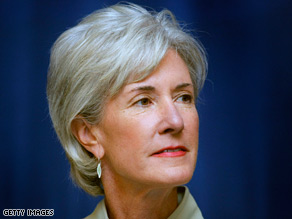 Kansas Gov. Kathleen Sebelius is said to have a great personal relationship with President Obama.

Obama on Monday nominated Sebelius to be his health and human services secretary.

Sebelius is a two-term Democratic governor in a Republican-leaning state. She previously served as a state insurance commissioner and oversaw Kansas' Medicaid program.

In a show of her bipartisan appeal, Republican governors such as Arnold Schwarzenegger of California and Jon Huntsman of Utah commended her selection.

Schwarzenegger said Sebelius "has a well-earned reputation of working across the political aisle," and Huntsman called the appointment "a welcome announcement."

Republicans from Sebelius' home state also threw their support behind the governor.

Kansas Sen. Sam Brownback released a statement with Roberts congratulating Sebelius and expressing an eagerness to work with their fellow Kansan on health issues.

But Brownback and Roberts came under criticism from some Republicans because they oppose abortion while Sebelius supports a woman's right to choose.

Brownback, who ran for the GOP presidential nomination, is considered one of the leading anti-abortion voices in the Senate.

In announcing their support for Sebelius, Brownback and Roberts said they expect to have several differences of opinion with the Obama administration -- especially on health care funding and nationalized health care -- but they made no mention of the abortion issue.

Sebelius has also drawn criticism from fellow Catholics for her views on abortion, in particular her veto of a late-term abortion bill.

Those predicting a tussle over Sebelius' Cabinet nomination point to her stance on abortion -- and not her experience -- as a possible cause for opposition among Republicans in both chambers.

"The pro-life groups have an itchy trigger finger on this. The in-box was full before Sebelius was nominated. They're ready for a fight," Christian Broadcasting's David Brody said.

In a column last week, Brody said that Democrats have solid numbers in the Senate, and Sebelius could sail through confirmation hearings, because some GOP moderates, such as Sens. Olympia Snowe and Susan Collins, both of Maine, are supporters of abortion rights.

Brody added that because Sebelius is so qualified, the abortion issue may not be enough to derail her nomination.

Sebelius has said that health care reform "isn't a partisan challenge; it's an American challenge." She also has received praise from leading progressive groups.

Officials have said Sebelius has a good relationship with Obama and was considered for other Cabinet posts. She endorsed Obama in January 2008 and helped him court female voters, Midwesterners and moderate Republicans.

The White House hopes that her track record of bipartisan appeal could help them get a quick start on health care reform.

"If we are going to help families, save businesses and improve the long-term economic health of our nation, we must realize that fixing what's wrong with our health care system is no longer just a moral imperative, but a fiscal imperative," Obama said at the White House Monday.

Obama made health care reform a central theme during the 2008 presidential campaign. He promised not only to achieve universal health care in his first term, but also to cut the average family's health care costs by $2,500.

An estimated 45.7 million Americans are uninsured, and for those with coverage, health care costs have been rising four times faster than wages, Obama said.

In his state of the nation address February 24, Obama pledged to help Americans with what he called "the crushing cost of health care," saying the country could not afford to put health care reform on hold.

"The cost of health care has weighed down our economy and our conscience long enough. So let there be no doubt, health care reform cannot wait, it must not wait and it will not wait another year," Obama said.

But Obama found out last month how hard bipartisanship can really be. In trying to pass his economic stimulus plan through Congress, not one House Republican voted for the package, and some Democrats came out against it. In the Senate, however, he was able to get three GOP senators to approve his plan.

All About Barack Obama • Kathleen Sebelius • U.S Department of Health and Human Services