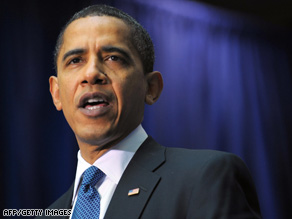 In a letter sent by 11 of the most prominent veterans organizations, the groups warned that the idea "is wholly unacceptable and a total abrogation of our government's moral and legal responsibility to the men and women who have sacrificed so much."

CNN obtained a copy of the letter sent to the White House last Friday by groups including The American Legion, Disabled American Veterans, Military Order of the Purple Heart, Veterans of Foreign Wars of the United States, and Iraq and Afghanistan Veterans of America. Read the letter (PDF)

A White House spokesman would neither confirm nor deny the option is being considered.

"The details of specific proposals will be transmitted with the full submission in April. The president has made it clear that meeting the needs of veterans is one of his priorities, and as a result has requested an 11 percent increase in discretionary funding for 2010, and the administration is actively working with the veterans community to ensure we get the details of this budget right," said White House spokesman Nick Shapiro.

In the letter, the groups said they have been told by sources on Capitol Hill and at the VA that the idea under consideration would allow the Department of Veterans Affairs to bill health insurance for a treatment of a disability or injury that was a result of military service.

The argument for the proposal is that it frees up money for the VA by charging the private insurers, allowing the VA to spend on more services, said Joe Violante, legislative director for Disabled American Veterans, who opposes the idea. While there could be savings, Violante warned it also could lead to an increase in premiums for veterans with private coverage.

""We cannot and would not agree to any proposal that would expand this concept any further," the heads of the 11 groups wrote in the letter.

"While we understand the fiscal difficulties this country faces right now, placing the burden of those fiscal problems on the men and women who have already sacrificed a great deal for this country is unconscionable."

Currently, veterans' private insurance is only charged when they receive health care from the VA for medical issues that are not related to service injuries, like getting the flu.

It could also make it harder for veterans to get private insurance if the companies decide to reject them for pre-existing conditions, rather than be billed for service-connected injuries, Davis said.

"This seems like bad politics and bad policy," said IAVA Policy Director Vanessa Williamson, noting that every veterans group opposes it and warns it will adversely affect veterans. "I don't see this as a tenable option."

All About Veterans' Affairs • U.S. Department of Veterans Affairs