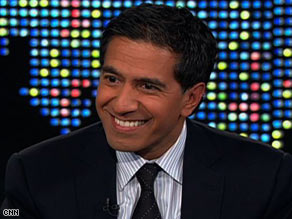 Dr. Sanjay Gupta will continue his work as a surgeon and for CNN.

"This is more about my family and my surgical career," Gupta told CNN's "Larry King Live."

The neurosurgeon said he would likely have had to give up practicing had he taken the job as the nation's top doctor.

In addition, the 39-year-old and his wife are expecting their third daughter any time, and the government job would have meant long periods away from his family, he said.

"I think, for me, it really came down to a sense of timing more than anything else," he said. "I just didn't feel I should do that now."

Gupta said he had not been formally nominated for the job, though he had spoken with senior members of the Obama administration, who made it clear he was their choice, he said.

"I think there was a real melding there," he said, adding that he felt flattered to have been considered.

Earlier Thursday, an administration official said Gupta "was under serious consideration for the job of surgeon general. He has removed himself from consideration to focus more on his medical career and his family. We know he will continue to serve and educate the public through his work with media and in the medical arena."

Sources said in January that Gupta had met then-President-elect Obama in Chicago, Illinois, in November to discuss the post. At the time, Gupta declined to comment.

The transition team was impressed with the combination of Gupta's government experience, as a White House fellow in 1997 and a special adviser to then-first lady Hillary Clinton, along with his medical career as a neurosurgeon and his communication skills, the transition sources said.

Gupta joined CNN in 2001. As chief medical correspondent for the health and medical unit, he is a lead reporter on breaking medical news, provides regular health and medical updates for "American Morning," anchors the half-hour weekend medical affairs program "House Call with Dr. Sanjay Gupta" and reports for CNN documentaries.

Based in Atlanta, Gupta also contributes health stories to CNN.com, co-hosts "Accent Health" for Turner Private Networks, provides medical segments for the syndicated version of "ER" on TNT and writes a column for Time magazine. He also anchors the global health program "Vital Signs" for CNN International and is featured in a weekly podcast on health issues called "Paging Dr. Gupta."

Just after joining CNN, Gupta became part of the team covering the September 11, 2001, terrorist attacks on New York and Washington. Later that year, he led breaking news reporting on a series of anthrax attacks.

In 2003, Gupta reported from Iraq and Kuwait as an embedded correspondent with the U.S. Navy's medical unit -- and worked alongside them, performing brain surgery five times.

In addition, Gupta reported from Sri Lanka in the aftermath of the tsunami that swept the region in December 2004. He also helped cover the aftermath of Hurricane Katrina from New Orleans, Louisiana, in 2005.

All About Sanjay Gupta • Medicine