Obama to visit Turkey in April 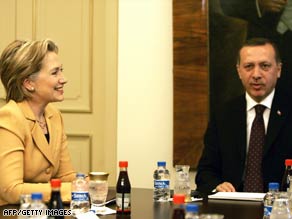 Secretary of State Hillary Clinton, in Ankara on a diplomatic tour, had said earlier in the day that Obama would visit Turkey soon.

Clinton was meeting with Turkish officials "to emphasize the work the United States and Turkey must do together on behalf of peace, prosperity and progress," she said.

Obama had said he was going to deliver a speech in a Muslim capital within the first hundred days of his presidency. The visit to Turkey will be his first to a Muslim country since he was inaugurated.

A senior Obama administration official said the visit would be "an important opportunity to visit a NATO ally and discuss shared challenges."

The official added that "it will also provide an opportunity to continue the president's dialogue with the Muslim world, a dialogue he started immediately and intends to maintain throughout his presidency."

Both countries pledged to pursue an Arab-Israeli peace settlement, peace in the southern Caucasus region, normalization of Turkish-Armenian relations and a settlement of the Cyprus question -- a dispute between Greek and Turkish Cypriots over territory.

They vowed to enhance the fight against terror groups such as al Qaeda and the Kurdistan Workers' Party and work to expand the natural gas and oil infrastructure to help Caspian basin and Iraqi energy producers reach European and world markets.

Turkey is a secular country and predominantly Muslim. It is a NATO member and has been a longtime ally of the United States. It is one of the few Muslim countries to have full diplomatic relations with Israel and has long been the Jewish state's closest military and economic partner in the region.

Feltman is the State Department's top Middle East official. His is the highest-level visit by a U.S. official since 2005.

Feltman, a deputy secretary of state, warned observers to "keep expectations in check," but said the U.S. and Syrian officials "found a lot of common ground."