WASHINGTON (CNN) -- President Obama led a chorus of "Happy Birthday" for Sen. Ted Kennedy on Sunday night at the Kennedy Center, topping off a celebration of the senator's 77th birthday that featured a crowd of celebrities and political heavyweights. 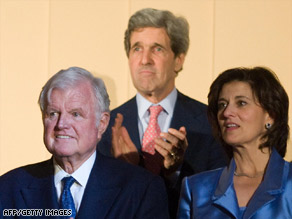 Sen. Ted Kennedy, left, with his wife, Victoria, and Sen. John Kerry at the Kennedy Center on Sunday night.

First lady Michelle Obama and the state's other senator, John Kerry, sat with Kennedy and wife, Victoria, in a box overlooking the stage. The president also visited the senator there after his surprise appearance.

"Happy birthday, Teddy," said niece Caroline Kennedy, who joked: "I never thought I'd be in a room with so many senators."

Kennedy's brief stint as a Senate candidate grabbed headlines for several months before she withdrew from consideration earlier this year.

Watch Obama dance at the party »

Caroline Kennedy and journalist Al Hunt presented the Profile in Courage Award to the senator, who did not appear onstage. "For you, there is no end to commitment," she said. "Only the next great battle."

Ted Kennedy was the unanimous selection of the committee that decides the award this year, the first time he has been eligible, according to the John F. Kennedy Library. He had been nominated in previous years, but could not receive the honor while serving as a member of the selection committee.

Kennedy has been recovering in Florida after treatment for a brain tumor, but returned to the capital last week for the White House health care reform summit.

The Profile in Courage Award is presented annually to public servants who have made courageous decisions of conscience.