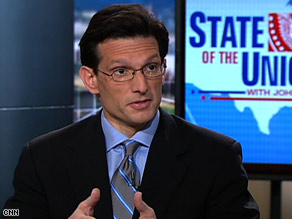 "Why are we going and distracting ourselves from the economy? This is job No. 1. Let's focus on what needs to be done," Rep. Eric Cantor, the Republican whip in the House of Representatives, told CNN's "State of the Union."

Cantor, R-Virginia, has been among the leaders of GOP opposition to Obama's economic policies.

In a conference call with reporters, Barnes said funding research is also part of the administration's plan to boost the plunging U.S. economy.

"Advances with regard to science and technology help advance our overall national goals around economic growth and job creation," she said, adding, "I think anytime you make an effort to try and separate these pieces of the puzzle, you're missing the entire picture."

Because stem cells have the potential to turn into any organ or tissue cell in the body, research advocates say they could yield cures to debilitating conditions such as diabetes, Parkinson's disease and spinal injuries. But because work on embryonic stem cells involves the destruction of human embryos, many conservatives supported the limits former President George Bush imposed by executive order in 2001.

"Frankly, federal funding of embryonic stem-cell research can bring on embryo harvesting, perhaps even human cloning that occurs," Cantor said. "We don't want that. That shouldn't be done. That's wrong."

The Bush policy limited federal funding to work on 60 existing stem-cell lines, but only 21 of those have proven useful to researchers. Congress voted to roll back those limits in 2006 and 2007, but Bush vetoed the legislation both times, leading to Democratic charges that he had put politics over science.

Obama's order will direct the National Institutes of Health to develop revised guidelines on federal funding for embryonic stem cell research within 120 days, said Varmus, who joined Barnes in the conference call with reporters.

"The president is, in effect, allowing federal funding of human embryonic stem cell research to the extent that it's permitted by law -- that is, work with stem cells themselves, not the derivation of stem cells," he said.

Supporters of the ban said researchers could still obtain private funding or explore alternatives such as adult stem cells. Opponents said the research could be carried out using embryos left over in fertility clinics, which otherwise would be discarded.

Sen. Claire McCaskill, D-Missouri, told reporters that reversing the Bush ban would "once again say to the rest of the world that we will be the beacon for cures and for hope." She credited her support for federal funding in part for her 2006 election.

"I think it's a great moment, and I'm proud of [Obama] for reversing that executive order," McCaskill said.

"My basic tenet here is I don't think we should create life to enhance life and to do research and so forth," Shelby said. "I know that people argue there are other ways. I think we should continue our biomedical research everywhere we can, but we should have some ethics about it."