Pope to visit Middle East in second week of May 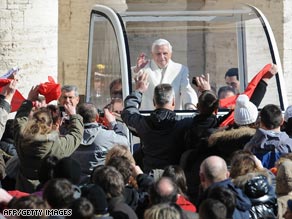 Pope Benedict XVI is to visit the Middle East from May 8 to May 15.

The pontiff confirmed in February that he would make the trip, but did not announce the dates until Sunday. It will be the first papal visit to some of Christianity's most holy places since the late Pope John Paul II made the pilgrimage in 2000.

Israeli President Shimon Peres said he was "delighted" the pope was coming.

"The pope will be a most honored guest, welcomed and respected by people from all walks of life. His visit will be a moving and important event bringing the spirit of peace and hope," Peres said in a statement.

The leader of the world's estimated 1.1 billion Catholics is expected to visit Bethlehem, where Christian tradition holds that Jesus was born. The site is in the West Bank, which is part of the Palestinian territories.