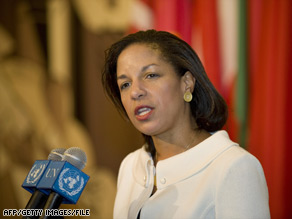 Susan Rice, the U.S. ambassador to the United Nations, has expressed concern about Iran's nuclear program.

"Iran also still refuses to respond constructively to IAEA [International Atomic Energy Agency] questions about its past work to develop a nuclear weapons capability," the ambassador, Susan Rice, told a U.N. Security Council subcommittee that deals with ensuring sanctions against Iran are being enforced.

"The United States urges its fellow Security Council members not only to take note of the IAEA's serious findings but also to vigorously support the IAEA in its continuing investigations of these critical matters."

The IAEA is the U.N. nuclear watchdog agency that is charged with inspecting Iran's nuclear facilities.

Rice said Tuesday's meeting was "the Security Council's first session on Iran since the release of the IAEA director general's most recent report on Iran -- a report that makes it clear that Iran is still not complying with its international nuclear obligations, including resolutions of this council."

In February, the Institute for Science and International Security released a report based on the latest IAEA data. The Washington think tank said the data indicated that Iran has reached "nuclear weapons breakout capability."

However, an IAEA official who asked not to be named cautioned against drawing such dramatic conclusions from the data, saying Iran's stock of low-enriched uranium would have to be turned into highly enriched uranium to qualify as weapons-grade material. That hasn't been done, the official said.

Tehran has denied pursuing nuclear weapons and insists its nuclear program is for peaceful purposes.

Iran tested its first nuclear power plant -- the Bushehr plant -- on February 25, using "dummy" fuel rods -- so no nuclear reaction began. Iranian officials said the next test will use enriched uranium, but it was not clear when the test will be held or when the facility will be fully operational.

Last month, President Obama said the United States is looking for opportunities for "face-to-face" dialogue with Iran, even though he said he has "deep concerns" about Tehran's actions. Iranian President Mahmoud Ahmadinejad responded by saying that his country welcomes talks with the United States "in a fair atmosphere with mutual respect."

The Obama administration has expressed markedly increased openness to diplomatic relations with Iran in contrast with other presidencies since the Islamic revolution in 1979.

Former President Bush refused to meet with Iran's president or engage in diplomatic dialogue with him. Bush labeled Iran a member of an "axis of evil" after the September 11, 2001, attacks.