Pentagon: No specific request to deploy troops to Mexican border

WASHINGTON (CNN) -- While the president has said states asked to deploy troops to the U.S. border with Mexico, the Pentagon has not received specific requests to do so, a Pentagon spokesman said Thursday. 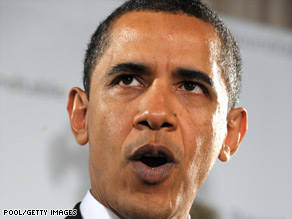 President Barack Obama says the United States is exploring how it can help Mexico's drug war.

The Defense Department is concerned about the escalating drug cartel violence in Mexico, and the U.S. government is in the process of determining if it can provide additional means to help the Mexican government, spokesman Bryan Whitman said.

Texas Gov. Rick Perry made an urgent call for up to 1,000 more troops, he said.

Any troops that might be sent would protect only the U.S. side of the border, he added, and there are no discussions of sending American troops into Mexico. He said it would be premature to speculate on how many could be sent.

The military is making "overtures" to see if there are ways the United States can help, he said, and how that could be translated into specific military participation.

Adm. Michael Mullen, chairman of the Joint Chiefs of Staff, traveled to Mexico last week. He spoke of the the need to work more with Mexico's military in a speech Wednesday night to the Young Professional Foreign Policy group.

The violence continues to rise in Mexico because the government is taking on the drug cartels more directly, and the United States needs to help, Mullen said.

"There is the opportunity to work cooperatively ... in ways that we haven't in the past," Mullen said. "And certainly the impact [the violence in Mexico] has on our borders is something that has gotten an awful lot of people's attention."