DILLON, South Carolina (CNN) -- Ty'Sheoma Bethea felt she had to speak up. 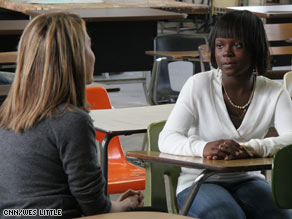 Ty'Sheoma Bethea sent a letter to lawmakers with her plea for money to help rebuild her crumbling school.

Her school was crumbling, and Congress was not going to approve money that could be used to rebuild it. So she wrote a letter to lawmakers begging for help.

"I said we're not quitters and we can make a change," Ty'Sheoma said. "And we're just students who want to be lawyers, doctors, congressmen and also presidents."

The letter made its way to the Oval Office and brought an extraordinary invitation. The White House sat the 14-year-old eighth-grader next to first lady Michelle Obama at the president's "state of the nation" address to Congress last month.

It seemed help was on the way. New stimulus money was coming from Washington, and Ty'Sheoma thought her school, JV Martin Junior High in Dillon, South Carolina, would finally be rebuilt. But her governor, Mark Sanford, announced he wouldn't use his share of the stimulus money on projects like rebuilding her school.

"It's easy to fall into the trap of we need to fix this one school," said Sanford, a Republican. "The hat that I wear is to look as best as I can -- and it will be imperfect -- at the state in its entirety."

Taking a stand against government spending, Sanford said he would be willing to use the $700 million in the stimulus bill only if he believes he has discretion to control paying down the state's debt.

That means Ty'Sheoma's community is left with its school, whose condition is astonishing.

"The auditorium is condemned," she said on the tour through the crumbling structure. "They use the stage for storage."

She looked around and said the walls are peeling off and debris has fallen from the ceiling. The gymnasium is in such bad shape, the basketball coach has to cancel games when it rains.

"The roof leaks water through the small cracks at the top of the roof," Ty'Sheoma said.

Many classes are taught in trailers on the school grounds. But the walls are so thin, teachers have to pause when trains roll by, which happens about five times a day.

The school lies in what's been called the Corridor of Shame, a stretch of highway with enormously poor neighborhoods that are mostly African-American. Some critics say the state doesn't want to spend money on black kids.

South Carolina Rep. James Clyburn, a Democrat, is outraged that the governor won't spend stimulus money in this community.

"It's a slap in the face of the people who live in those counties," Clyburn said. "If the majority of those people happen to be African-American, it's a slap in their faces as well."

Sanford flatly rejects the charge, and his office says state lawmakers could rebuild JV Martin with their own funds.

"Spending money that you don't have, I think, is a horrible idea," Sanford said.

Ty'Sheoma said she just wants the squabbling to end.