WASHINGTON (CNN) -- A new national poll indicates that worries about unemployment have tripled over the past year. 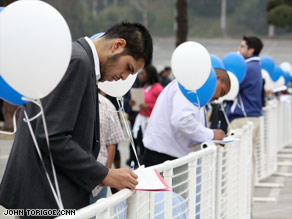 Job seekers in Los Angeles, California, fill out paperwork at a job fair that attracted 10,000 people.

Inflation is second at 20 percent, followed by the mortgage crisis at 16 percent, the stock market at 14 percent and taxes at 11 percent.

Last April, 47 percent of poll respondents said rising prices and the rate of inflation were the most important economic issues facing the country, putting that at the top of U.S. economic concerns.

Unprecedented reporting on the money meltdown that's changing your life.
This week on CNN

"Now they're spooked by high unemployment figures and the growing concern that good jobs aren't available."

The nation's unemployment rate stood at 8.1 percent in February, up a half-percentage point from January. There are worries that the jobless rate could break into double digits by year's end.

The unemployment level is the highest in more than 25 years. About 4.4 million jobs have been lost since the recession began in December 2007.

The poll also indicates the economy remains the most important issue facing the country today. Sixty-three percent said the economy is their top concern, with health care a distant second at 9 percent.

The federal budget deficit follows at 8 percent, the wars in Iraq and Afghanistan at 6 percent, education and terrorism tied at 5 percent, and energy policy at 2 percent.

The past year has seen a striking loss of confidence among Americans workers. A majority have lost confidence that they could find a good job at their current rate of pay if they were to look for one. The number of people worried that there will be layoffs at their workplace also has grown significantly.

"When wage earners lose confidence, it has ripple effects throughout the economy," Holland said. "Consumption patterns are based in part on workers' prospects of keeping their jobs or finding new ones.

"Right now, American workers remain confident that they will keep their own jobs, but many see layoffs in the future at their workplace, and they aren't confident that other good jobs are out there."

Last March, a majority of workers said they were confident that there would be no layoffs at their place of employment, but only 38 percent feel that way now.

The number of people confident that they won't be laid off over the next six months stands at 57 percent, down 12 percentage points from March 2008.

Americans are split on whether they could find another job if they are laid off, with 49 percent confident they could land another good job and 51 percent not confident -- an increase of 10 percentage points from a year ago.

The CNN/Opinion Research poll was conducted Thursday through Sunday, with 1,019 adult Americans questioned by telephone.

The survey's sampling error is plus or minus 3 percentage points.

All About Unemployment Rate • Afghanistan War • Layoffs and Downsizing