(CNN) -- Two key senators Tuesday announced a plan to impose a hefty tax on retention bonuses paid to executives of companies that received federal bailout money or in which the United States has an equity interest. 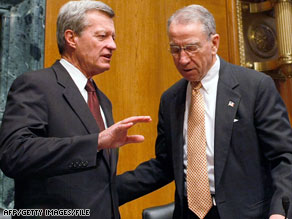 Sens. Max Baucus, D-Montana, and Chuck Grassley, R-Iowa -- the chairman and top Republican on the Senate Finance Committee -- said companies would not be allowed to restructure the payments to those executives through deferred compensation to avoid the tax.

The senators plan comes after New York Attorney General Andrew Cuomo confirmed in a letter to Congress that this year, after receiving federal bailout money, AIG paid 73 employees bonuses of more than $1 million each.

In a letter to congressional leaders Tuesday, Treasury Secretary Timothy Geithner said administration lawyers agreed the government could not force AIG to stop the bonuses. But, he said, the government would contractually require AIG to repay Treasury the $165 million in bonuses it paid out.

"Millions of Americans are losing their jobs -- millions. And to some degree they're losing their jobs because of actions taken by some of these firms," Baucus said. "At the same time, they're giving themselves bonuses. I mean, give me a break. What are these people thinking? That's part of the problem. They're not thinking."

All other nonretention bonuses more than $50,000 would be subject to the same tax, the senators said.

"If our bosses had made a decision we'd tell you what it was," said another.

On Monday President Obama said he planned to attempt to block bonuses to executives at ailing insurance giant AIG, payments he described as an "outrage."

The president spared Liddy from criticism, saying he got the job "after the contracts that led to these bonuses were agreed to last year."