WASHINGTON (CNN) -- A bloody war between Mexican drug cartels is no longer solely a south-of-the-border problem, members of Congress said Tuesday at a hearing on the issue. 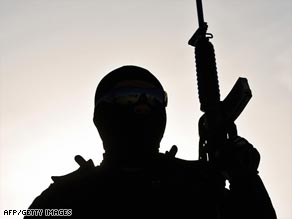 A member of the Mexican Federal Police patrols in Ciudad Juarez during a recent operation to fight drugs.

The violence accompanying those battles has crept into the United States, and is believed to be largely fueled by money and guns from America, said Sen. Dick Durbin, D-Illinois.

"The drugs are coming north, and we're sending money and guns south," said Durbin, chairman of the Senate Judiciary Subcommittee on Crime and Drugs. "As a result, these cartels have gained extraordinary power."

About 90 percent of guns seized in Mexican raids are traced back to the United States, according to the federal Bureau of Alcohol, Tobacco, Firearms and Explosives, he said. About 2,000 firearms cross the border into Mexico daily, according to the Brookings Institution, he added.

The subcommittee held a joint hearing Tuesday on the issue with the Senate Caucus on International Narcotics Control. The hearing focused on ways the United States can assist Mexican President Felipe Calderon's efforts to combat drugs and violence.

In addition, American communities are seeing an increase in violent crimes related to the Mexican drug trade. In Phoenix, Arizona, in 2008, 366 kidnappings for ransom were reported -- more than in any other U.S. city, Durbin said, citing federal statistics. The vast majority of those, he said, were related to Mexican drug cartels.

"We're not winning the battle," Arizona Attorney General Terry Goddard told lawmakers. "The violence that we see in Mexico is fueled 65 to 70 percent by the trade in one drug: marijuana."

Goddard said he believes the United States can do more to remove the profit from such operations, as well as attempt to reduce the demand for the drugs.

It's not only border states that are affected, either. Authorities believe cartels reached 230 American cities, up from 50 in 2006, Durbin said. In his home state of Illinois, far from the Mexican border, he said, cartels are believed operate in three cities: Chicago, East St. Louis and Joliet.

Lawmakers and witnesses at the hearing universally applauded Calderon's efforts to deal with drug violence through actions such as sending troops into Ciudad Juarez. "I think he needs every single bit of our support," said Sen. Dianne Feinstein, D-California.

However, the violence has skyrocketed, Goddard said, with a new and appalling trend: assassinations of police officers, prosecutors and other officials who are combating cartels.

Perhaps even more horrifying, as the violence increases, so does the possibility that innocent citizens will be caught in it, he said. In at least one instance in Phoenix, criminals making a home invasion had the wrong house, he said.

"The casual fallout is going to be significant if we can't do something to try to assist Mexico in stopping it south of the border," Goddard said.

Efforts by Arizona authorities to fight the violence include intercepting wire transfer payments to smugglers of drugs and of human beings, Goddard said. Between 2003 and 2007, he said, Arizona seized about $17 million in such transfers.

However, a more comprehensive and regional effort is needed, he said, as the cartels, faced with increasing law enforcement surveillance in one area, will simply take their crimes elsewhere.

And authorities must target the masterminds and leaders behind the violence, he said: "Just arresting and deporting foot soldiers is a waste of critical assets."

Also Tuesday, a federal firearms official told the subcommittee there has been a "troubling increase" in the number of hand-grenades seized from Mexican drug traffickers recently, and that officials are concerned violence involving explosives could spill into U.S. border towns.

"In the past six months, we have noted a troubling increase in the number of grenades seized from, or used by, drug traffickers," William Hoover of the Bureau of Alcohol, Tobacco, Firearms and Explosives told the Senate subcommittee.

"We are concerned about the possibility of explosives-related violence impacting our U.S. border towns," he said.

Hoover did not give statistics about the number of hand-grenades seized by ATF, nor were statistics immediately available from the agency.

Another federal law enforcement official told the subcommittee he doesn't expect Mexican cartels to intentionally target U.S. officials and interests "in the near term."

Anthony Placido of the Drug Enforcement Administration said the DEA does not believe "that in the near term the cartels will deliberately target U.S. government personnel or interests or intentionally target U.S. civilians in the United States."

But, he added, "defining spillover is a tricky business."