CNN) -- As the tide of outrage over AIG bonuses continued unabated Wednesday, a congressional committee became the epicenter of the issue as Edward Liddy, CEO and chairman of the troubled insurer, prepared to answer questions about executive bonuses. 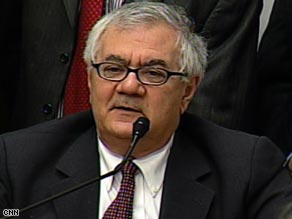 Rep. Barney Frank says the bailout has resulted in "de facto nationalizing" for companies that received it.

On Wednesday's "American Morning," Rep. Barney Frank, who chairs the House Finance Committee, shared what was legally and legislatively within the government's power on recovering the AIG bonuses and reforming the whole financial incentive system.

Kiran Chetry, CNN anchor: When he appears before your committee today, what type of assurances are you guys seeking from Mr. Liddy with regard to these bonuses?

Rep. Barney Frank, D-Massachusetts: Well, I don't have a lot of confidence in Mr. Liddy's view at this point. When he said that first he couldn't get the money back because they had contractual rights but also that he was worried about not retaining them, it left me unconvinced he's really going to be trying.

The notion that we want to retain these people, that we want to pay the people who messed it up in the first place so they don't leave, is just backward to me. I think we would probably be better off if they did leave.

We are going to ask him to fully be cooperative in our effort, but I think the federal government has to take the lead on the lawsuits. We own this company in effect, and we're not asking that these bonuses be rescinded because we have lent money to the company. I believe we are saying as the owners of the company, we do not think we should be paying bonuses or should have paid bonuses to people who made mistakes, who were incompetent.

Chetry: Right. You said this yesterday, as well, "We own it." We own 80 percent of AIG, but [the government] seems to be caught in this purgatory ... where you own and you're paying for bailing out this company, yet you don't have any say in the decisions it makes.

Frank: Well, I want to change that.

Frank: It is de facto nationalizing, in the sense of the ownership. Understand, this is not, by the way, part of the congressionally voted rescue plan initially. The Federal Reserve has power under a statute that dates from 1932 that most of us weren't aware of. It hasn't been used for many years.

And in September, the chairman of the Federal Reserve, Mr. (Ben) Bernanke, came to Congress and announced to us [about the bailout]. We weren't asked or consulted. We were told that he was lending $85 billion to AIG under this authority. Now, since then, when we have voted, we have learned how to put tough conditions on, and so I do want to reassure people. Because I think people need to know that, is this a recurring pattern or not? We will not see this happening again. We have banks that got money now that are getting money or just got money that want to give it back because we've been too tough. And I'm proud of that.

But we do have this problem where, under that statute from 75 years ago, the Federal Reserve gave the money without any conditions. I still believe that we have a right legally to recover this, because we can assert our ownership rights and say, yes, you may have had a contractual right to a bonus but your rotten performance means you should forfeit it.

Chetry: When your colleagues in the Senate moved to prevent bonuses in the stimulus bill last month, they made an exception. The Senate made an exception for pre-existing contracts, which, effectively exempted AIG. So, you talk about these strings that are attached. Why did that happen?

Frank: Because there is a problem with doing things retroactively legislatively. And you have to hear -- understand the distinction between legislative and legal. No, I don't think the American people want a situation where Congress, whenever it feels a contract shouldn't have been signed, passes a law to abrogate that past contract. That's why I am saying we should assert our ownership rights.

I want to invalidate these contracts and say, look, we are the owners of this company. Yes, contracts were signed with you that I wish hadn't been signed. But given how badly you performed, I want to argue that they did not perform under the contract.

The difference would be having a precedent that I don't think the American people want, even if for this situation, we'd all like to see it different, where whenever Congress thinks a contract should be abrogated, it should be abrogated. So, I'm talking about a legislative abrogation of a contract. I'm talking about a lawsuit as an owner of the company [that wants to reward a] bonus, we ought to fine you for messing it up.

Chetry: I think people are asking, why now? Why did it get stripped from the stimulus bill in closed-door negotiations between the White House and the House?

Frank: Because that provision would not have worked. You could not have legislatively canceled them out. You say you hear me, but you're not -- I mean, look we all wish a lot of things could be different. I wish when the Federal Reserve had initially done this, they'd done it differently.

We have a constitutional provision against the abrogation of contracts. That's why, again, I don't think it works to simply pass a law. We could pass a law tomorrow and say those contracts are no good. I don't think it would hold up in court. What I think can hold up in court is for us to say, "You do not deserve those bonuses under the contract because you performed so badly."

And by the way, that's one of the things I've been working on for several years. It's to go after this whole financial incentive system that they have, whereby if you are working in one of these companies, and you take a risk, and it pays off, you get compensated. If you take a risk and it blows up in everybody's face, you don't lose anything. We have to put an end to this kind of one-way street, heads they win, tails they break even.

One of the things we're going to demand is the names of these people. They should not be allowed to hide behind anonymity. We will insist on knowing who they are and publishing those names.