Geithner: I should have known about bonus problems sooner

(CNN) -- Treasury Secretary Timothy Geithner confirmed Thursday that the department did talk to Sen. Chris Dodd about a clause he put forth in the stimulus legislation that would have strictly limited executive bonuses. 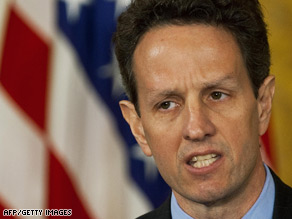 A loophole in the bill allowed bailed-out insurance giant American International Group to keep its bonuses.

The Treasury Department was concerned that legislation that would restrict contractual bonuses would not hold up to legal challenges, Geithner said in an interview with CNN's Ali Velshi.

"We expressed concern about this specific version. We wanted to make sure it was strong enough to survive legal challenge," Geithner said.

Geithner's interview will air on CNN in full at 8 p.m. Thursday.

Dodd, chairman of the Senate Banking Committee, also acknowledged Wednesday his role in controversy, after previously denying having anything to do with crafting language that permitted the bonuses.

Watch Geithner describe when he knew about bonuses »

Geithner said he learned the full scale of the bonus problems on March 10.

"It's my responsibility; I was in a position where I didn't know about those sooner. I take full responsibility for that," he said.

Watch Geithner talk about how criticism is part of the job »

The bill had included a measure from Dodd to limit executive bonuses. But slipped inside at the last minute was an exemption for bonuses agreed to "on or before February 11, 2009." That allowed AIG to go ahead with its controversial extra pay.

For days, no one would say who was responsible for the loophole that let that happen.

On Tuesday, Dodd denied that he had anything to do with adding the language.

"When I left the Senate, it was not in there. So when I wrote the language, there was no such language like that," he said then.

But, saying his previous comments had been misconstrued, Dodd said Wednesday that he added the exemption after getting pressure from the Treasury Department.

Dodd, a Connecticut Democrat, told CNN's Dana Bash and Wolf Blitzer that Obama officials pushed for the language to an amendment designed to limit bonuses and "golden parachutes" at those companies.

But that change ultimately allowed AIG to go ahead with doling out $165 million in bonuses. The federal government rescued the company from financial ruin with more than $170 billion in taxpayer assistance. Taxpayers now own nearly 80 percent of AIG.

Dodd said he did not speak to high-ranking administration officials, and the change came after his staff spoke with staffers from Treasury. iReport.com: Sound off on AIG

In a statement later Wednesday, Dodd said that his amendment allows the Treasury Department to review bonus contracts such as AIG's and seek ways to get the money back for taxpayers.

Speaking about the ability to try to get back payments, Geithner said Thursday, "we're going to explore that, but in any case we're going to make sure that the American people are compensated for any payments we can recoup."

Propelled by the outrage across the country, the House of Representatives on Thursday passed a bill that would apply a 90 percent tax to bonuses paid out of the Troubled Asset Relief Program, which was approved last year to stabilize the financial sector.

The bill affects companies getting $5 billion or more in TARP funds and bonuses paid out by Fannie Mae and Freddie Mac. It would apply to people making more than $250,000 a year.

Trying to quell the outrage and move the country forward, Obama said Wednesday to put the blame on him.

"Everybody's pointing fingers at each other and saying it's their fault, the Democrats' fault, the Republicans' fault. Listen, I'll take responsibility. I'm the president," he said at a town hall meeting in Costa Mesa, California.

The president did not directly address the language change.

AIG's derivatives branch is in Dodd's home state. Many of the bonuses in question were awarded to executives at that branch. But in his statement, Dodd said he had no idea the legislation would affect the company.

According to a transcript of the Tuesday interview, Dodd was asked about an executive-compensation provision "that exempts everything prior to February 11, 2009 -- any contracts prior to that date."
iReport.com: AIG stands for 'Actually, it's government'

Asked whether he later had been able to figure out who added the language, he said, "I really don't know."

On Capitol Hill on Wednesday, AIG chief executive Edward Liddy called the roughly $165 million in bonuses "distasteful" but necessary because of legal obligations and competition.

"I've asked those who received retention payments in excess of 100,000 or more to return at least half of those payments. Some have already stepped forward and offered to give up 100 percent of their payments," said Liddy, who joined AIG after the bailout.

CNN's Ted Barrett and Sandra Endo contributed to this report.