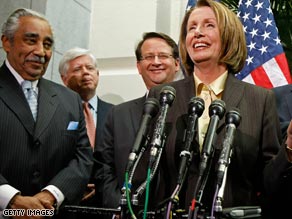 The measure passed, 328-93; most Democrats supported the measure, while Republicans were sharply divided.

A two-thirds majority among all members voting was required for passage.

The measure would tax individuals on any bonuses received in 2009 from companies getting $5 billion or more in money from the Troubled Asset Relief Program, or TARP. Bonuses for people with incomes over $250,000 would be taxed at a 90 percent rate.

"Today's vote rightly reflects the outrage that so many feel over the lavish bonuses that AIG provided its employees at the expense of the taxpayers who have kept this failed company afloat," President Obama said. "I look forward to receiving a final product that will serve as a strong signal to the executives who run these firms that such compensation will not be tolerated."

The measure now moves to the Senate, which is considering a bill to tax retention bonuses paid to executives of companies that received federal bailout money.

Kyl wants "to understand the root and cause of what happened here before we haphazardly rush and approve what we think is the remedy," his spokesman Ryan Patmintra said.

House Ways and Means Committee Chairman Charlie Rangel, D-New York, told reporters Wednesday, "We can't have any concept of we're getting even, but we must have a concept that we're trying to show that Congress ... cannot tolerate that."

The vote comes one day after AIG chief executive Edward Liddy testified before Congress that he has asked employees of the bailed-out insurer who took home more than $100,000 in bonuses to return at least half.

More than $165 million has been slated for bonuses to AIG's senior executives; the federal government rescued the company from financial ruin with more than $170 billion in taxpayer assistance.

Referring to the AIG executives who received bonuses, Rangel said, "I don't think these are the type of people to [whom you can] make an appeal to equity and justice. I don't think they really know the difference. I don't really think they've had life experience to allow them to believe the pain that they've caused for millions of Americans."

"We must stabilize the financial system in order to strengthen our economy and create jobs," she said. "We must also protect the American taxpayer from executives who would use their companies' second chances as opportunities for private gain.

"Because they could not use sound judgment in the use of taxpayer funds, these AIG executives will pay the Treasury in the form of this tax."

A similar proposal in the Senate would attempt to recoup bonuses by taxing both individuals and companies, but Rangel said House leaders decided against penalizing companies because they could simply ask for more taxpayer money.

Earlier Wednesday, President Obama also lashed out at the bonuses given to AIG executives, calling them "outrageous."

"But just as outrageous is the culture that these bonuses are a symptom of, that [has] existed for far too long; a situation where excess greed, excess compensation, excess risk-taking have all made us vulnerable and left us holding the bag."