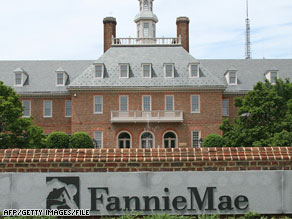 A view of Fannie Mae headquarters is seen on July 14, 2008, in Washington.

Executive vice presidents Kenneth Bacon, David Hisey, Michael Williams and Thomas Lund will be receiving bonuses of close to half a million dollars each. Bacon supervises community development for the company, Hisey is its deputy chief financial officer, Williams is its COO and Lund oversees the single-family mortgage business.

By contrast, Fannie Mae CFO David Johnson received no bonus on top of his salary of $625,000, while CEO Herb Allison received no compensation or bonuses in 2008 or 2009.

A spokesman for Fannie Mae deferred comment on the bonuses to the Federal Housing Finance Agency.

The bonuses were necessary to keep Fannie's most experienced executives working to reverse the effects of the mortgage crisis, FHFA Director James B. Lockhart told CNN.

"As the previous senior management teams left, it would have been catastrophic to lose the next layers down and other highly experienced employees," Lockhart said in a statement.

"Fannie Mae and Freddie Mac purchased 73 percent of all mortgages originated last year and are the key players in the Making Home Affordable plan designed to help millions of homeowners. Many employees have received significant pay reductions, with no bonuses for 2008 performance and all past stock grants are virtually worthless. This retention program is pay for specific efforts underway now to meet national goals," he said.

On Tuesday, two key senators announced a plan to impose a hefty tax on retention bonuses paid to executives of companies that received federal bailout money or in which the United States has at least a 50 percent equity interest -- including Fannie Mae, Freddie Mac and AIG.

"Millions of Americans are losing their jobs. Millions. And to some degree they're losing their jobs because of actions taken by some of these firms," said Sen. Max Baucus, a Montana Democrat and Senate Finance Committee chairman.

"At the same time, they're giving themselves bonuses. I mean, give me a break. What are these people thinking? That's part of the problem. They're not thinking."

Fannie and Freddie serve a crucial role in keeping the housing market liquid, giving banks and lenders the ability to sell the loans they make in order to have the funds to make additional loans to consumers.

But the companies, trying to meet the competing interests of the greater market and their shareholders, began to buy up risky subprime loans, which were generally made without income verification.