(CNN) -- U.S. Rep. Ron Paul was interviewed on CNN's "American Morning" on Friday. Paul, R-Texas, offered his thoughts on the AIG outrage, the stimulus bill and Congress' actions to boost the economy. 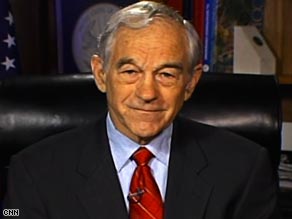 "The whole process is outrageous," Rep. Ron Paul says of Congress' reaction to the financial crisis.

KIRAN CHETRY: So why did no one else see this coming? Congressman Ron Paul says it's because no one's reading these bills. And he joins us live with more on this right now.

Thanks for being with us this morning.

PAUL: Well, it happened because we did something that was outrageous. These bonuses are outrageous -- $165 million is a lot of money -- but so is $700 billion of unconstitutional appropriations. That's where the problem came from.

So yes, people are concentrating on these bonuses right now, but they're missing the point. The point is that we shouldn't be in the business of bailing out all these companies. And we don't even know where the rest of the money went. We just discovered -- probably inadvertently -- that there were bonuses.

Watch Paul talk about the focus on bonuses »

Now everybody is outraged -- which they should be -- so what do they do? They passed $700 billion worth of unconstitutional appropriations; then they come in and they discover this. The public gets notice of it, so the Congress has to act and feel outraged. So they pass a bill which is an ex post facto bill as well as a bill of attainder, which is unconstitutional, so they're using the tax code to punish people. So they do one harm -- one thing wrong -- they create a problem an unintended consequence; then they go back, and they will solve the problem by more of the same.

PAUL: That's essentially what we're doing with our economy.

CHETRY: Right. Well, you voted no on this bonus tax legislation. You agree that the bonuses were outrageous, but you also called this bill that was quickly put together because of all the outrage, a disgrace. What were you saying to your fellow congressmen and -women about what was going on?

PAUL: Because they -- in Congress, they panic. They react minute-to-minute, whether it's passing the Patriot Act or doing all these things. They react in emotional ways. So when the banking crisis hit, instead of dealing with over the last decade, which I've been begging and pleading for them to do, they wait, and oh, there's a financial crisis. Oh, it came from too much spending, too much taxes and too much printing of money. So what do they do? They spend more. They blindly appropriate this money, and I just think the whole process is outrageous. And we're on the verge of a major crisis. We're in the middle of it, and it will get a lot worse.

You know, the day we did this -- on Thursday -- was the day after the Federal Reserve announced, Oh, OK, we're going to buy another $1.25 trillion worth of government debt and mortgage debt, and the dollar goes down 3 percent, and the next morning it goes down 1.5 percent, and we're talking about these bonuses, about passing an unconstitutional law in a way to punish people.

So they compile their mistakes, and they avoid looking at the real problem. And even in my statement on the floor, I said, what we ought to be talking about is, why don't we find out from the Fed what they're doing with these trillions of dollars? But we're not even allowed to ask them questions. The Fed doesn't have to answer any questions...

PAUL: ... about where their money goes.

So, we're missing the point.

PAUL: We're missing the target. I'm glad we're talking about the bonuses, but it's so distracting.

CHETRY: No, you're right. This is -- Something that we've been talking about here on CNN this morning as well is that, you know, all of this hemming and hawing back and forth over this stimulus, which, I mean, over these bonuses -- which is a lot of money; I mean, $165 million -- but then, on the same day, the Treasury just floods the market with $1 trillion.

But this is what you said last time you were on the show. This was from January. You were really looking into your crystal ball here. Let's take a look.

PAUL: There were five copies available to the House and I think five to the Senate. And that wasn't available until the House opened at noontime. So no, essentially, it was not available to us. And who could stay up all night and read 1,000 pages? So, obviously, it was done like business as usual. Things have been going on like this for a long time. But this one was a little bit worse, and it was bigger than usual, so it was not a very good day for America.

CHETRY: You actually said that on February 16, talking about the stimulus bill. Is what we're experiencing right now in this AIG bonus fiasco just being a small my microcosm of that? What happens when our elected officials aren't able to read this legislation?

PAUL: Yes, it is. And that's why we're responsible.

You know, there's a lot of blame to go around. Even the American people have some blame for allowing their members of Congress to do what they do. But Congress is supposed to be protecting the purse. And the president did sign these bills -- rather, the last president and this current president. They're very much involved in what's going on.

But ultimately, Congress should assume responsibility. This is what's happened over the many, many decades that we have transferred the responsibility of the Congress into the executive branch. The executive branch writes laws, and the courts rule, and Congress has reneged so much on their responsibility. And now, all we know what to do is spend money. We don't say how it should be spent, and then we allow the Federal Reserve to print money. We can't audit the Federal Reserve.

And so it's the Congress' fault. If Congress would wake up, we could rein in a lot of this. So to me, it was very annoying to concentrate on doing what we were doing on Thursday and pretending we were going to improve things. This is just a gross distraction from the important issues that we should be dealing with.

CHETRY: Congressman Ron Paul, always great to get your point of view. Thanks for being with us this morning.