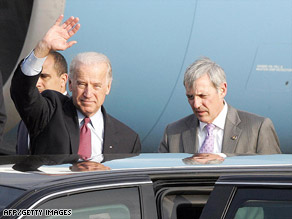 Biden arrived Sunday from Chile, where he attended the Progressive Governance Conference. He met with seven Latin American and European heads of state at that two-day gathering.

Biden will meet privately with Arias before they are joined by current or incoming heads of state from Guatemala, Belize, El Salvador and Panama, officials said. Honduras and Nicaragua will send deputy foreign ministers.

The meeting comes ahead of this week's Group of 20 summit in England that President Obama will attend.

Biden made a short statement upon arrival in San Jose, where he was met by a Costa Rican delegation that included Foreign Minister Bruno Stagno.

"This visit is an opportunity to meet leaders from the region and strengthen the existing ties between the United States and Central America," Biden said. "This administration is looking for a productive and respectful relationship, and we know that type of relationship initiates listening to each other. That is why we are here. I expect to listen to and learn from President Arias and the other leaders with whom I will meet tomorrow."

"We think it's opportune for the United States to have a positive agenda with Latin America," Stagno said in a televised interview with CNN affiliate Teletica. "We need to turn the page on an agenda that was mostly negative."

Tomas Duenas, the Nicaraguan ambassador to the United States, said the agenda for Monday's talks will include financial matters, economic development, human rights, security, immigration and other common areas with the United States and the region.

Biden is scheduled to return Monday evening to Washington.