THE HAGUE, Netherlands (CNN) -- Secretary of State Hillary Clinton was coy Monday about whether she would meet Iranian delegates at an international conference on Afghanistan, and she urged Tehran to play a positive role in helping stabilize its neighbor. 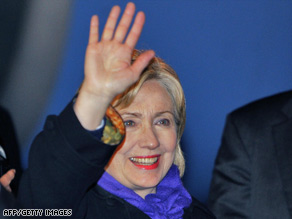 U.S. Secretary of State Hillary Clinton arrived in the Netherlands Monday for a conference on Afghanistan.

"I believe that there will be an opening by this conference that will enable all the countries, including Iran, to come forward," Clinton told reporters aboard her plane en route to The Hague for Tuesday's conference. "The fact that they accepted the invitation to come suggests that they believe there is a role for them to play, and we're looking forward to hearing more about that."

More than 80 countries and international organizations will be attending the conference, aimed at jump-starting political support for Afghanistan in the wake of the new U.S. strategy for the region, which President Obama announced last week. Clinton said she would be sharing the administration's policy review during the conference.

"We want to share the review in person with the friends and stakeholders in Afghanistan's future and encourage them to begin thinking hard about what each can do to support governance, security, economic assistance, regional cooperation, all of the necessary steps that we have to see fulfilled," she told reporters aboard her plane.

Obama on Friday announced his decision to send an additional 4,000 troops to Afghanistan to increase training for the Afghan army and police force. They will be joined by hundreds of civilian specialists, such as agricultural experts, educators and engineers. The increase comes on top of an earlier announcement to send 17,000 additional troops to battle a re-energized Taliban insurgency.

Clinton said while the Obama administration has received a "good initial response" to the new U.S. strategy, it was time to "turn to operationalizing and implementing how we're going to create more capacity within Afghanistan, internationalize support for stability and security, and [achieve] our primary mission of disrupting, dismantling and defeating al Qaeda" in advance of an August election.

Clinton said she would announce at the conference that the United States would pledge $40 million toward securing a free and fair election in Afghanistan. She said the U.S. would not support or endorse a candidate.

The Afghan supreme court ruled Sunday that President Hamid Karzai will remain in office until the election.

Karzai's term is up in May, but an independent commission has set the election for August 20. The court's decision found that allowing Karzai to remain in power until that vote "is in the interest of the Afghan people and state, and it is also consistent with the spirit and interpretation of the constitution."

Karzai is Afghanistan's first popularly elected leader in recent history. He was named head of a provisional government after the U.S.-led invasion that dislodged the Taliban in 2001, and he won an interim term in 2002 and a full term in 2004.

He is seeking a new term in August. But his government has come under increasing criticism for corruption and inefficiency, and an earlier effort to move the elections up to April drew criticism from opposition groups and the United States.

A major component of the new U.S. strategy involves a surge of civilian personnel to aid political reform, root out corruption and boost development.

Clinton said the U.S. would seek to "quit the redundancy and the duplicity" of existing international aid programs in Afghanistan. The U.S. also would try to impose greater measures of accountability to "trace the investment and the payoff for the American taxpayers and for the people on the ground," she said.

"We recognize we're starting at a point where there is very little credibility for a lot of what's already been invested," she said. "There are good programs within governments and good programs within NGOs [nongovernmental organizations], but it is fair to say overall they have been a disappointment. And we know that, and we're going to have to try to get that fixed."

The U.S. strategy also emphasizes the need to combat extremism in western Pakistan. On Friday, Obama called for legislation authorizing "$1.5 billion in direct support to the Pakistani people every year over the next five years -- resources that will build schools, roads and hospitals and strengthen" the Pakistani government.

"It is absolutely essential that we look at Afghanistan in conjunction with Pakistan," Clinton said.

Japan will host a donor's conference for Pakistan in April.

Although the role of Tuesday's conference was to seek political support rather than pledges for Afghanistan, Clinton said the United States wants "to encourage the participants to begin thinking hard about what their contributions will be."

Clinton said she has "no plans" to meet with Deputy Iranian Foreign Minister Mohammad Mehdi Akoundzadeh, who is attending the conference. But she left open the possibility, saying she would not predict how the discussions would flow.

Although Clinton tried to keep the focus on Afghanistan, her attendance at the conference with a senior Iranian official marked the first such meeting involving the two countries as the Obama administration seeks greater engagement with Iran. Senior U.S. officials have said cooperation on Afghanistan could provide such an opening.

Clinton noted Iran's history of cooperating with the United States on Afghanistan since the U.S. invasion in 2001. In 2003, U.S. ambassador to Afghanistan Zalmay Khalilzad held talks with Iranian officials in Geneva, Switzerland, about how the two countries could work together.

She cited border security and counternarcotics efforts as two specific issues that "have a direct effect on Iran's well-being."

"We are hoping that each neighbor, friend and stakeholder who is participating will have constructive ideas about what that country will do to try to help us achieve the security and stability goals that we've set for Afghanistan," she said.

All About Afghanistan • Hillary Clinton • Iran