WASHINGTON (CNN) -- As Barack Obama takes off for his first overseas trip as president, a new national poll indicates that more than eight in 10 Americans think he will do a good job representing the United States to the world. 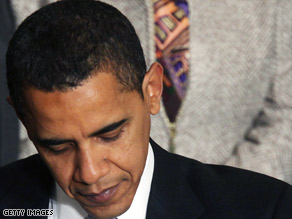 A poll indicates eight in 10 Americans think President Obama will represent the United States well to the world.

And seven in 10 people questioned in the CNN/Opinion Research Corporation survey, released Tuesday, believe that leaders of other countries respect Obama.

That last figure is in sharp contrast with George W. Bush.

At the start of his presidency in 2001, only 49 percent believed that foreign leaders respected Bush.

"Except for the period following the 9/11 attacks, that number never got any better for Bush," says CNN Polling Director Keating Holland.

Obama is scheduled to travel to Britain on Tuesday, where he will participate with other leaders in the G-20 summit.

"Even among Republicans, a majority believes that other world leaders respect Obama."

Obama is scheduled to travel to Britain on Tuesday, where he will participate with other leaders in the G-20 summit.

The survey's sampling error is plus or minus three percentage points.