Commentary: Is Obama skidding or crashing?

By Penn Jillette
Special to CNN

Editor's note: Penn Jillette -- the larger, louder half of Penn & Teller -- is a magician, comedian, actor, author and producer. 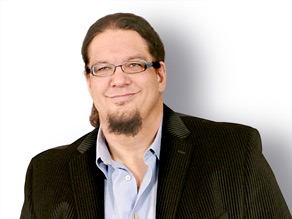 (CNN) -- Counterintuitive action makes a fellow feel smart. When I first got my driver's license, I took my old Ford Falcon into the Greenfield Public High School parking lot when it was freshly covered with fresh powder on top of wet slippery Western Massachusetts snow and ice. I turned fast, gunned it and lost control of the car in a skid.

I turned into the skid and instantly gained control of my car. Telling someone to turn into a skid, that's crazy talk. It seems so wrong, but my Dad knew it worked. Dad suggested I do it over and over in the parking lot, so I would conquer my intuition to be ready when a real emergency arose on a real road. Counterintuitive actions prove we can trust real knowledge and do the opposite of what we feel makes sense.

I'm a fire-eater. There is some technique to fire-eating, but most of the practice goes into learning that one's mouth is wet enough, most of the heat goes up enough, and cutting the oxygen leg off the fire triangle (it's now a fire tetrahedron, but I learned fire-eating a long time ago) with one's mouth really does put the fire out.

It took watching a professional whom I trusted do it -- a lot of trust and a lot of practice -- before my first reaction, when my mouth started to burn from the lit torch in my mouth, was to put the torch deeper in my mouth, close my mouth around the torch and put it out.

Handling fire seems like a superpower. There are whole seminars and self-help jive centered on fire-walking, which is hustled as "mind over matter," or "empowerment" but is really just counterintuitive physics. As long as the fire walk is set up right and you keep moving, you can even hope and pray to be burned, while yelling counter-self-help slogans such as "I do not have any power to do this" and "universe, please burn my little piggies," and you'll be fine.

Whether it's fire walking or knowing that the Earth is round, everyone seems to dig counterintuitive thinking. Many dig it when our president explains we're going to spend our way out of debt. That's way against all the intuition we've developed in our adult lives. Spending our way out of debt doesn't work often, does it? It's crazy talk. Didn't a lot of people try that spending out of debt thing?

I live in Vegas, and I see people by the side of the road with cardboard signs who seem like they might have tried that spending their way out of debt thing. Or maybe they tried the all too intuitive "crack will make me feel healthy again" thing. I don't know.

Didn't lots of people try piling up debt on credit cards and buying houses they couldn't afford in hopes of solving all their financial problems? I've tried spending more than I was going to earn (remember, I was carny trash, that's why I know how to eat fire), and it way didn't work. Spending more money than I had to spend put me more in debt, just like my silly intuition warned me.

President Obama is so damn smart. He just drips smart. He clearly understands stuff that we could never understand. He's trustworthy. If Obama were teaching fire-eating, we would all learn fast. If he told you that the burns would be minor and the fire would go out when you closed your mouth, you'd believe him. If I weren't twice his weight, I'd fall back with my eyes closed into his caring arms in one of those cheesy '70s church trust exercises. He could talk me into anything.

Obama tells us that we can spend our way out of debt. He tells us that even though the government had control over the banks and did nothing to stop the bad that's going on, if we give them more control over more other bank-like things, then they can make sure bad stuff doesn't happen ever again. He says we can get out of all those big wars President Bush caused by sending more troops into Afghanistan. And I don't know. I really don't know.

I trusted my Dad that turning into a skid would work. I trusted my carny mentor, Doc Swan, that closing my mouth around a burning torch would put it out. They were right. Maybe the United States borrowing more money than I could imagine in a billion years with a billion computers and a billion monkeys typing on them, will get us out of financial trouble. I really don't know. It's certainly true that many counterintuitive things are true, and when you have the guts to do something counterintuitive that works, it's really cool. It's a superpower under our yellow sun.

But there are some things that are just intuitive. Did you know, that if you're going 100 mph, directly at a very, very thick, reinforced concrete wall, and you speed up, so you're accelerating right when you hit the wall that the accident you have is going to be much worse than if you'd jammed on the brakes as soon as you saw the wall at the end of the street? Did you know that? It's exactly what everything you know and feel would tell you, and it's exactly true. Most times when you're driving, or playing with fire, or handling money, the thing that makes sense to you is also true.

I way hope we're turning into a skid and not accelerating into a concrete wall.

Note: Reading this article does not give you the information you need to really eat fire, fire walk or even turn into a skid. Do not try any of it. You really need a trained professional to teach you, and most important you need to sign something that says Penn Jillette and CNN are not in any way responsible for your inevitable injuries.

The opinions expressed in this commentary are solely those of Penn Jillette.

All About Physics • Barack Obama • Consumer Credit and Debt