WASHINGTON (CNN) -- Former Republican Sen. Ted Stevens of Alaska has been "cleared" by the Justice Department's request to dismiss his federal corruption convictions and drop all charges against him, his lawyer said Wednesday. 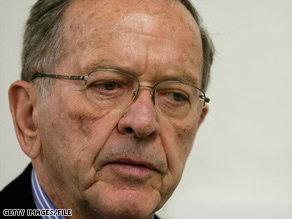 Prosecutors accused Stevens of failing to disclose hundreds of thousands of dollars of "freebies" from an oilfield services company on Senate ethics forms. But in December, an unnamed FBI whistle-blower accused prosecutors of withholding evidence from the defense, and the Justice Department asked a judge to dismiss the charges against Stevens on Wednesday.

"His name is cleared," Stevens' lawyer, Brendan Sullivan, told reporters. "He is innocent of the charges, as if they'd never been brought."

Stevens, 85, lost his bid for a seventh full term in November after his conviction on seven counts of lying on Senate ethics forms. Sullivan said the Justice Department was forced to request the dismissal because of "extraordinary evidence of government corruption."

Watch more on the dismissal of the case »

And one of Stevens' longtime friends, Utah Sen. Orrin Hatch, said Wednesday that Stevens was "screwed by our own Justice Department."

In a statement issued Wednesday morning, Stevens thanked the Justice Department and Attorney General Eric Holder for requesting that the charges be dropped.

"I always knew that there would be a day when the cloud that surrounded me would be removed," Stevens said. "That day has finally come."

U.S. District Judge Emmet Sullivan has set a Tuesday hearing on the Justice Department's request to dismiss the case.

Sullivan, who is not related to Stevens' lawyer, excoriated prosecutors during the trial and held the prosecution in contempt at one point. In December, two months after the guilty verdicts, the FBI whistle-blower accused prosecutors of withholding evidence from the defense and reported that someone with the government had had an inappropriate relationship with Bill Allen, an oil industry executive who was the government's key witness.

In the motion it filed Wednesday, the Justice Department acknowledged that Stevens was not given access to notes taken by prosecutors during an April 2008 interview with Allen, the former chairman of an oilfield services company at the center of a corruption probe in Alaska. The notes show that responses by Allen, the prosecution's star witness, were inconsistent with testimony he gave against Stevens, and that information from the interview could have benefited Stevens at trial, the motion says.

"In light of this conclusion, and in consideration of the totality of the circumstances of this particular case, I have determined that it is in the interest of justice to dismiss the indictment and not proceed with a new trial," Holder said in a written statement.

Hatch, a senior Republican on the Senate Judiciary Committee, said he called Stevens in Alaska on Wednesday and the former senator sounded "elated, as anyone would."

"Here's a guy who gave better than 60 years' service to the country and was screwed -- screwed by our own Justice Department," Hatch said. But he praised Holder for "standing up and fixing this foul situation."

And in a statement Wednesday, Alaska Gov. Sarah Palin said that Stevens "deserves to be very happy today. What a horrible thing he has endured. The blatant attempts by adversaries to destroy one's reputation, career and finances are an abuse of our well-guarded process and violate our God-given rights afforded in the Constitution.

"It is a frightening thing to contemplate what we may be witnessing here -- the undermining of the political process through unscrupulous ploys and professional misconduct. Senator Stevens ... never gave up hope. It is unfortunate that, as a result of the questionable proceedings which led to Senator Stevens' conviction days before the election, Alaskans lost an esteemed statesman on Capitol Hill. His presence is missed."

The Justice Department's Office of Professional Responsibility will review the prosecution team's conduct in Stevens' case, Holder said. Asked whether the prosecutors should be charged themselves, Sullivan told reporters, "That is not my job. I'm a defense lawyer."

During the trial, Assistant Attorney General Matthew Friedrich said Stevens hid "hundreds of thousands of dollars of freebies" he received from Allen's company, VECO, and from Allen himself. Many of the allegedly free services were given as part of the renovation of Stevens' Alaska home, prosecutors said.

All About Ted Stevens • U.S. Department of Justice • Alaska