WASHINGTON (CNN) -- Former Massachusetts Gov. Mitt Romney praised President Obama at a GOP fundraising dinner Wednesday in front of a crowd that might have been expecting a heavy dose of rally-the-troops conservatism. 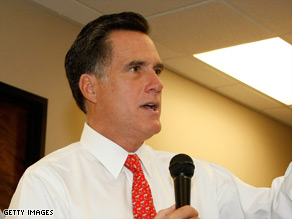 "I also think it's important for us to nod to the president when he's right," Romney said, after chiding the president's budget. "He will not always be wrong, and he's done some things I agree with."

Romney, who spoke at a dinner for the National Republican Senatorial Committee, said he's pleased with the president's plans to "finish the job" in Iraq and Afghanistan -- lines that drew applause from the partisan audience. He also applauded the president for standing up to the auto industry.

"I hope he continues to be tough and shows some backbone because that industry is not going to make it unless we have real backbone and get those guys to fundamentally restructure all of their obligations," he said.

The former businessman even offered faint praise for Treasury Secretary Tim Geithner, saying that after a series of initial missteps, "I think he's finally getting close to the right answer."

Romney helped Senate Republicans raise more than $2 million at the fundraiser as they try to regroup in time for the 2010 mid-term elections.

Romney, speaking without notes or teleprompter, ultimately drew a familiar line in the sand between Democrats, who he said favor heavy-handed government, and Republicans, who prefer individual freedom and free enterprise.

"I think the American people are seeing through what's happening," he said. "The Democrats are trying to use this crisis as a way to advance their philosophy of the supremacy of government, and I don't think they're being fooled."

Romney claimed the president "incorrectly believes that the 2008 elections settled the great issues that divide America. I don't believe that's the case. I watched the debates. The great issues were rarely discussed at all."

John McCain, Romney's former rival for the Republican presidential nomination, was not among those attending. Even though he's up for re-election in 2010 and may need an assist from the NRSC, an aide to McCain said he was working late on his proposed budget alternative.

All About Mitt Romney • Republican Party