DOVER AIR FORCE BASE, Delaware (CNN) -- His name was Phillip A. Myers. A staff sergeant in the U.S. Air Force, he was killed in a roadside bombing in Afghanistan on Saturday. 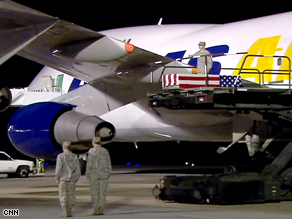 The body of Phillip Myers, 30, arrived at Dover Air Force Base in Delaware on Sunday.

The return of his body to the United States aboard a charter aircraft Sunday marked a solemn moment that has been repeated more than 5,000 times at Dover Air Force Base in Delaware since the start of the war in Afghanistan in late 2001.

Much of this night was like so many of the others: The well-practiced and crisp movement of the carry team silently transferring the body from the plane to the truck that would transport it to the base mortuary and the presence of Myers' family, quietly watching every step and order, ensured dignity and respect for the fallen in an atmosphere that does not lend itself to peace and quiet.

This night, however, was not like the other nights. Watching all of this were about 40 journalists allowed to cover the return of Myers' remains. It was the first time in almost 20 years the return of a fallen U.S. service member was able to be recorded by the media.

Myers' widow was the first to be asked by the military, under a new policy by Defense Secretary Robert Gates, if she wished to have news media at Dover Air Force Base for her husband's final return home. Her decision to do so was historical and allowed the public to see a side of the wars in Afghanistan and Iraq the country has not yet seen.

The only noise on the flight line was the perpetual whine of the Atlas Air 747's power generator. This was the plane that had brought Myers and another fallen soldier back to the United States. The media were not allowed to cover the other soldier's transfer and were not given his name or the circumstances of his death, because the family had not granted permission.

On the flight line, journalists were asked not to speak, use camera flashes or make undue movement while watching the transfer.

Watch the coverage of the return of the fallen service member »

The team slowly moved the transfer case from the aircraft onto the loader. With a jolt, the quiet of the night was shattered as a diesel engine was started to lower the loader toward the ground and then was shut off.

Bathed in light from the giant floodlights along the flight line, the team hoisted the transfer case and carried it to a waiting panel truck.

As the transfer case was secured, the carry team saluted, the doors of the truck were slowly closed and then driven under police escort to the base mortuary.

Seven family members watched the truck until it was out of sight, one man among them crying into a tissue.

Myers was from Hopewell, Virginia, and died Saturday of wounds suffered in a roadside bombing, the Air Force said.

He was assigned to the 48th Civil Engineer Squadron, with the Royal Air Force Lakenheath, UK, and in March 2008 received the Bronze Star for valor. He was 30 years old. Casualties: Afghanistan | Iraq

The ban on media coverage of returning war dead was implemented by President George Bush in 1991 and the policy has been the subject of much debate since. Some called it censorship; others said it allowed privacy and respect for the families during a very difficult time.

Watch an Army widow call the policy is 'dignified' »

An exception on the ban by President Bill Clinton in 2000 allowed coverage of the return of sailors killed in the attack on the USS Cole.

Shortly after taking office, President Obama asked Gates to take a look at the policy. In February, Gates reversed it, but with conditions. Family members would be asked if they wanted news media to cover the transfer of their loved one's body. iReport.com: What do you think about this decision?

Service members' support groups had mixed opinions on the change. Some welcomed the change to show the human cost of war, and others opposed it.

"We are committed to seeing that America's fallen heroes are received back to their loved ones and their country with the honor, respect and recognition that they and their families have earned," Gates said after his decision.

"The overriding principle is that decisions about media coverage should be made by those most affected: the families," he said.

All About Iraq War • Afghanistan War • Dover Air Force Base