(CNN) -- President Obama said Tuesday that recent stimulus measures "are starting to generate signs of economic progress," but more tough times are ahead. 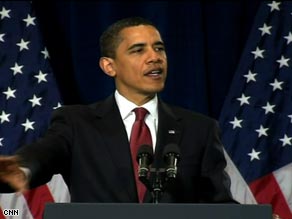 The White House described Obama's speech as a major address on the economy.

"The Recovery Act, the bank capitalization program, the housing plan, the strengthening of the nonbank credit market, the auto plan and our work at the [Group of 20 summit] have been necessary pieces of the recovery puzzle," Obama said in a speech at Georgetown University in Washington.

But economic improvements do "not mean that hard times are over -- 2009 will continue to be a difficult year for America's economy. ... The severity of this recession will cause more job loss, more foreclosures and more pain before it ends."

He also offered a fierce defense of government actions to prop up tottering banks and clean their books of toxic assets.

"Of course, there are some who argue that the government should stand back and simply let these banks fail -- especially since in many cases it was their bad decisions that helped create the crisis in the first place," he said. "The truth is that a dollar of capital in a bank can actually result in $8 or $10 of loans to families and businesses, a multiplier effect that can ultimately lead to a faster pace of economic growth."

"A lot of people think about money and their own personal finances when you basically sign your name on that dotted line and send your tax dollars in, so to a certain extent it's a good time," he said.

The president has struck a more optimistic tone in recent days, saying Friday that he was starting to see "glimmers of hope in the economy," partly as a result of his administration's actions.

"I think there are a few glimmers of hope," Chrystia Freeland, the U.S. managing editor of the Financial Times, said Tuesday.

"There are some good signs, and also the stimulus is starting to work. That's a huge amount of money that the government is pumping into the economy. It has to have some impact, and it is. But I think it would be far too early to declare a victory," Freeland said.

Obama signed into law his $787 billion economic stimulus plan in mid-February, calling it the "beginning of the end" of the country's economic woes.

Nearly six in 10 respondents, or 58 percent, think Obama has a clear plan to get the economy back on track, according to a CNN/Opinion Research Corp. poll released Tuesday.

That figure is more than double the 24 percent who think that Republicans in Congress have a clear plan on the economy. Nearly three in four polled said the GOP doesn't have a clear economic plan. Read more on the poll

Federal Reserve Chairman Ben Bernanke was expected to say Tuesday that he sees "tentative signs" that the economic decline is easing.

"A leveling out of economic activity is the first step toward recovery. To be sure, we will not have a sustainable recovery without a stabilization of our financial system and credit markets," Bernanke planned to say in a speech at Morehouse College in Atlanta, Georgia, according to excerpts of his address.

"I am fundamentally optimistic about our economy," the excerpts say. "Today's economic conditions are difficult, but the foundations of our economy are strong, and we face no problems that cannot be overcome with insight, patience and persistence."

Lakshman Achuthan, managing director of the Economic Cycle Research Institute, said leading indicators such as the stock market and growth rate suggest that things may have bottomed out and the economy could be turning around.

"When you see that sequence, it foretells that essentially the worst may be upon us right here. So you're still going to see bad unemployment numbers and things of that nature, but forward looking, there are objective signs of hope," Achuthan said.

But he noted there's no clear science when it comes to the economy because there are "human beings involved and we have all these crazy emotions."

"Preceding this crisis, we all had a huge error collectively of optimism, and following the crisis, just as the recovery is happening, we're all collectively going to have a big error of pessimism. It's the way it's worked since the beginning of time, and it will work this time, too," he said.

CNN's Ed Hornick and Kristi Keck contributed to this report.