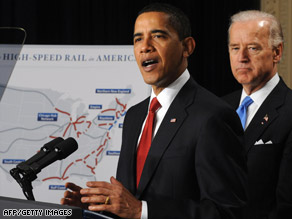 Each of the corridors identified by the president's report are between 100 and 600 miles long. The blueprint envisions some trains traveling at top speeds of over 150 mph.

Federal grants would also be directed toward separate individual rail projects that are deemed "ready to go," with preliminary engineering and environmental work already completed.

"My high-speed rail proposal will lead to innovations that change the way we travel in America. We must start developing clean, energy-efficient transportation that will define our regions for centuries to come," Obama said at an event near the White House.

The president cited the success of high-speed rail in European countries such as France and Spain as a positive example for the United States.

His plan would be funded in part through the recently passed $787 billion stimulus plan, which includes a total of $8 billion for improvements in rail service. Obama has also proposed a separate five-year, $5 billion investment in high-speed rail as part of the administration's suggested fiscal year 2010 budget.

The president spoke one day after the governors of eight Midwestern states sent a letter to Transportation Secretary Ray LaHood requesting stimulus funds for the construction of a regional network of faster passenger rail lines.

The city of Chicago, Illinois, would be the hub of the proposed Midwest Regional Rail System, which would stretch to Madison, Wisconsin, in the Northwest; St. Louis, Missouri, in the South; and Detroit, Michigan, in the East.

During the 2008 presidential campaign, Obama pledged to support a national network of faster passenger trains. The administration has already dedicated $1.3 billion in federal funding for Amtrak.

The money for the rail service, which carried almost 29 million passengers last year, will go primarily to infrastructure repair and improvement.