Obama: Summit of the Americas 'productive'

PORT OF SPAIN, Trinidad and Tobago (CNN) -- President Obama said Sunday the 34-nation Summit of the Americas was a "very productive" meeting that proved hemispheric progress is possible if countries set aside "stale debates and old ideologies." 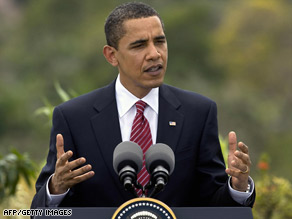 Speaking to reporters at the conclusion of the summit, Obama cited a potential thaw in relations between the United States and longtime adversaries Cuba and Venezuela, but said the ultimate test "is not simply words, but deeds."

Leaders did not "see eye to eye" on some important issues, but the meeting proved it is possible to "disagree respectfully," the president said.

He reached out to the Cuban government before the summit by lifting all restrictions on U.S. citizens wishing to visit or send remittances to relatives in Cuba.

Cuba was not represented at the summit, but Obama noted that the leaders of other countries highlighted Cuba's program that sends "thousands of doctors" throughout the hemisphere. A number of countries depend heavily on Cuba's medical assistance program.

Obama called Cuban President Raul Castro's recent indication of a willingness to discuss human rights issues "a sign of progress." But he said the Cuban government could send a much clearer, more positive signal by releasing political prisoners or reducing fees charged on remittances that Americans send to relatives in the country.

Change in Cuba will not come quickly, but it is good for other countries to see that "we are not dug in into policies that were formulated before I was born," Obama said.

U.S. policy on Cuba has remained largely unchanged since 1962, when the U.S. government imposed a trade embargo.

Turning to Venezuela, Obama conceded Washington has vast differences with that country's president on economic and foreign policy issues. But he said the strategic interests of the United States would not be endangered by having a "more constructive relationship" with the oil-rich nation.

Asked what an "Obama doctrine" would be, he declined to give a specific answer, but he outlined broad principles such as the importance of listening to other countries. The United States, Obama said, remains the most powerful nation in the world but cannot solve problems such as climate change, drugs and terrorism on its own.

"If you start with that approach, you are inclined to listen, and not just talk," he said.

Obama, who was set to return to Washington on Sunday, added that the United States is at its best when it stands "for universal ideals [such as] freedom of speech and religion."

"If we confess to having strayed from [our] values, it strengthens our hand [and] allows us to speak with greater moral force and clarity," he said.

When he released the documents Thursday Obama said the United States needs to "right its course in concert with our core values."

All About Barack Obama • Venezuela • Cuba