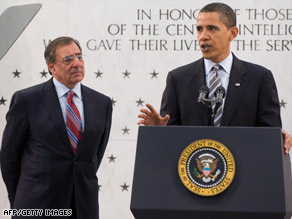 The president's remarks came in the wake of criticism from a former CIA chief and others that his decision compromised national security and encouraged terrorist groups such as al Qaeda.

Obama also met with CIA Director Leon Panetta, Deputy Director Stephen Kappes and other officials, and talked to employees about the importance of the agency's mission to national security.

The president asserted that he had released the documents primarily because of the "exceptional circumstances that surrounded these memos, particularly the fact that so much of the information was [already] public. ... The covert nature of the information had been compromised."

Obama added that he ended the controversial interrogation techniques mentioned in the memos because the United States "is stronger and more secure" when it can deploy both power and the "power of our values, including the rule of law."

Watch Obama talk about the importance of values »

Although abiding by the rule of law can make battling groups such as al Qaeda more difficult, he added, it is ultimately why "we'll defeat our enemies. We're on the better side of history."

Panetta, while introducing the president, promised that the CIA would abide by the president's order barring controversial enhanced interrogation techniques. He also agreed that it was possible to protect the country and its values at the same time.

Obama's visit to the CIA's Langley, Virginia, headquarters came a day after former CIA Director Michael Hayden said the decision to release the four memos undermined the work the agency is doing.

Hayden, President George W. Bush's CIA director from 2006 to 2009, said the release of the memos emboldens terrorist groups such as al Qaeda.

"What we have described for our enemies in the midst of a war are the outer limits that any American would ever go to in terms of interrogating an al Qaeda terrorist. That's very valuable information," Hayden said on "Fox News Sunday."

"By taking techniques off the table, we have made it more difficult in a whole host of circumstances I can imagine, more difficult for CIA officers to defend the nation."

He added, "if you look at what this really comprises, if you look at the documents that have been made public, it says 'top secret' at the top. The definition of top secret is information which, if revealed, would cause grave harm to U.S. security."

Obama said last week that withholding the memos "would only serve to deny facts that have been in the public domain for some time."

"This could contribute to an inaccurate accounting of the past and fuel erroneous and inflammatory assumptions about actions taken by the United States," he said in a statement.

The memos include details on terrorist suspect interrogations such as waterboarding, a technique used to simulate drowning. Obama has called the method torture.

The administration also has come under criticism from human rights organizations after announcing that CIA officials would not be prosecuted for past waterboarding and other harsh interrogation tactics.

Watch for details on the interrogation techniques »

Obama believes "that's not the place that we go," White House Chief of Staff Rahm Emanuel said Sunday on ABC's "This Week."

Attorney General Eric Holder has promised that officials who used such interrogation tactics would be in the clear if their actions were consistent with Justice Department legal advice under which they were operating at the time.

Homeland Security Secretary Janet Napolitano said Sunday that the release of the memos is consistent with how Obama conducts government.

"It's about transparency. It's about accountability. And he released them. And on the other hand, he said to those CIA employees who were following what the Department of Justice told them they could do, they would not be subject to further prosecution, because it's also about closing this chapter so we can move on to the future," Napolitano said.