WASHINGTON (CNN) -- U.S. Secretary of State Hillary Clinton warned that Pakistan is in danger of falling into terrorist hands because of failed government policies and called on Pakistani citizens and expatriates to voice more concern. 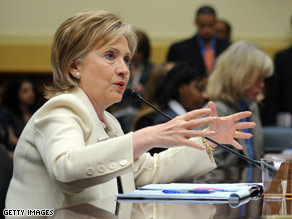 "I think that we cannot underscore the seriousness of the existential threat posed to the state of Pakistan by continuing advances, now within hours of Islamabad, that are being made by a loosely confederated group of terrorists and others who are seeking the overthrow of the Pakistani state, a nuclear-armed state," Clinton said in an appearance before the House Foreign Affairs Committee Wednesday.

"I don't hear that kind of outrage and concern coming from enough people that would reverberate back within the highest echelons of the civilian and military leadership of Pakistan," she added.

In her first congressional hearing since being confirmed, Clinton told the panel the chief goal of the Obama administration's strategy is to defeat al Qaeda and prevent it from returning to Afghanistan.

But Pakistan's ambassador to the United States, Husain Haqqani, told CNN that the situation is not as dire as Clinton seemed to describe.

"Yes, we have a challenge," Haqqani said. "But, no, we do not have a situation in which the government or the country of Pakistan is about to fall to the Taliban."

Taliban fighters moved into the Swat Valley as part of a peace deal with the government that has come under fire from U.S. observers. But Haqqani compared it to the deals U.S. commanders in Iraq made to peel insurgents away from Islamic jihadists blamed for the worst attacks on civilians there.

"We are open to criticism of that strategy, but to think that that strategy somehow represents an abdication of our responsibility towards our people and towards the security of our country and the region is incorrect," he said.

Several members of Congress voiced concern about Islamic extremists gaining ground in Pakistan, including Committee Chairman Howard Berman, a California Democrat. He warned the United States cannot allow extremists to control Pakistan or operate with impunity along the border with Afghanistan.

Clinton said the international community is working closely to combat extremism in both Pakistan and Afghanistan, but Pakistanis themselves need to take responsibility.

"Not only do the Pakistani government officials, but the Pakistani people and the Pakistani diaspora -- many of whom are extremely successful Americans here, in academia, businesses, the professions and so much else -- need to speak out forcefully against a policy that is ceding more and more territory to the insurgents, to the Taliban, to al Qaeda, to the allies that are in this terrorist syndicate," she said.

Last week, the Taliban imposed sharia law in the Swat Valley as part of a peace deal with the government, which appears unable or unwilling to stop the Taliban's steady advance.

On other topics, Clinton said that preventing Iran from acquiring nuclear weapons is an "imperative" for the Obama administration, which is taking a more active role in diplomatic efforts toward Iran.

"We are deploying new approaches to the threat posed by Iran, and we're doing so with our eyes wide open and with no illusions," she said. "After years during which the United States basically sat on the sidelines, we are now a full partner" in diplomatic talks on Iran.

She was vague in response to questions about how long it would take to get results on Iran, but said the process in place -- under which the United States is interacting more directly with allies and reaching out to Iran -- has potential.

"It is going to be a more successful engagement if our partners around the world understand they must work with us," including the need to impose tougher sanctions on Iran if diplomacy fails, she said.

Rep. Dana Rohrabacher, a California Republican, asked the administration to release other classified documents that former Vice President Dick Cheney has said will explain the Bush administration's position on interrogation.

Clinton responded that she didn't consider Cheney "a particularly reliable source of information."

All About Hillary Clinton • Pakistan • The Taliban