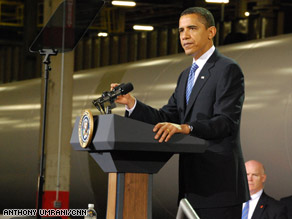 The president announced the initiative, to be administered by the Interior Department, while reiterating his pledge to push for a comprehensive energy plan that encourages the development of alternative fuel sources, cuts dependence on foreign oil, addresses climate change, and creates new jobs.

Wind power can generate 20 percent of the country's electricity by 2030 and support 250,000 jobs, Obama said during a visit to a wind turbine tower manufacturing plant.

It is part of "beginning a new era of energy exploration," he said.

Contrary to the assertion of some critics, the country does not have to choose between protecting the environment and expanding the economy, Obama said. The real choice is between "prosperity and decline."

You elected them, now grade them with CNN! Rate the president, congress and your state leaders.
Wednesday, April 29th at 8 ET

The president said there is no "silver bullet" to solving the country's energy needs, and that a variety of energy sources will be required to reduce dependence on fossil fuels. The United States needs to boost domestic production of oil and natural gas in the short term before fully transitioning to alternative sources, Obama said.

But over the long term, new energy sources will be required both to address the issue of climate change and strengthen the economy, he said.

Meanwhile, Vice President Joe Biden said Wednesday that $300 million in stimulus money will be given to state and local governments to help expand the number of clean and sustainable vehicles in cities around the nation. The program is called the Clean Cities Alternative Fuel and Advanced Technology Vehicles Pilot Program.

"Every day is Earth Day," said Biden at a Washington Metropolitan Area Transit Authority training facility in Landover, Maryland, where he announced the program.

The plan, according to Biden, would help local governments and transportation authorities invest in clean vehicles and fund the fueling infrastructure to support them.

"From advanced battery cars to hybrid-electric city buses, we're going put Recovery Act dollars to work deploying cleaner, greener vehicles in cities and towns across the nation that will cut costs, reduce pollution and create the jobs that will drive our economic recovery," Biden said in a statement.

The funding adds to $11 billion already allocated to the Department of Energy to boost local energy efficiency programs and weatherize low-income homes. To participate, local governments have to apply to the Clean Cities Program for funding, and they can receive money for a variety of hybrid vehicles and alternative fuels.

CNN's Ed Hornick and Lauren Kornreich contributed to this report.

All About Barack Obama • Energy Technology