King: Second 100 days will be bigger test for Obama

On CNN's "State of the Union," host and chief national correspondent John King goes outside the Beltway to report on the issues affecting communities across the country. This week, King takes a look at President Obama's first 100 days in office. 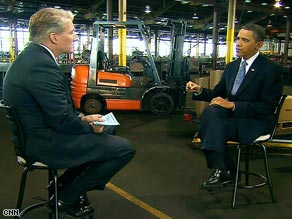 WASHINGTON (CNN) -- As introductions go, it has been a fast-paced, fascinating first 100 days: an ambitious domestic agenda aimed at reinvigorating the economy and the government's reach into its workings, and several provocative steps on the world stage that, like at home, signal a clear break from the previous administration.

It is the second 100 days that will give a much more comprehensive test of President Obama's approach, his resilience -- and his effectiveness.

• Winning approval of a congressional budget resolution that puts Congress on record as dedicated to dealing with major health care reform legislation this year.

• Implementing new ethics guidelines designed to significantly curtail the influence of lobbyists on the executive branch.

• Breaking from the Bush administration on a number of international policy fronts, including climate change, while spelling out his plan to withdraw American troops from Iraq.

By the numbers, it is hard to not judge it as a strong start politically: The American people, for the most part, like their new president and see him as a leader. Nearly six in 10 Americans approve of how Obama is handling the economy, and hardly any blame the president for the country's economic struggles and challenges.

Watch more on the polls »

"I mean, it was basically left to him, you know. He didn't really do it, in my opinion," is what Chris Guynn told us when we visited him in Peoria, Illinois, just as he was told by Caterpillar that his job was being eliminated.

"But it's his problem now," Guynn said of Obama. It's a reminder that although he has broad public support and considerable patience from most Americans at the moment, Obama's political standing over time will be closely intertwined with the strength of the economy.

There are some warning signs found in the numbers and found repeatedly in our travels these past 100 days to 17 states and a diverse mix of communities, from rural Vermont and suburban New Jersey to the critical emerging battleground states of the South and Southwest.

• Obama is perceived as a liberal, a word that is often more a liability than an asset in national politics.

• Nearly four in 10 Americans voice the concern that he is trying too much at once.

At our recent diner conversation in Park Ridge, New Jersey, teacher Peter Fitzgerald put it this way: "I would kind of worry about him burning out, too, because he's doing so much. Any time you look at the news, President Obama's doing this, he's got a million things going on. I understand that you have to attack the issues that are going on here, but I wonder some times if they are a little fearful he is going to run out of gas."

• If there are a few major stumbles and setbacks, the risk is that voters will question his leadership and governing skills.

His core supporters are wary of two major Obama initiatives: taxpayer-funded bailout of big financial and auto companies, and his plan to significantly increase U.S. troop levels in Afghanistan.

Several mayors we have visited in the past few months also grumble a bit that stimulus money is slow to trickle through the bureaucracy.

"So far, I haven't seen any of the stimulus money," Las Vegas, Nevada, Mayor Oscar Goodman said at his office this week. "I am told that we are going to get it. I think it will probably help us with our transportation. ... But we need it right now, because what we have to do is, we have to create jobs so that folks will be able to pay their mortgages and not lose their homes and be able to feed their families."

Asked to give Obama a grade at the 100-day mark, Goodman was for the most part complimentary.

"You've got to give credit where it's due, and I think that the president has been very aggressive in the programs that he is suggesting," the mayor said.

The assessments from more conservative quarters are, not surprisingly, very different.

Sen. John McCain, a rival in the presidential race, says Obama has not sought out genuine bipartisanship, a sentiment echoed by the Senate and House Republican leadership teams.

Former Vice President Dick Cheney infuriated the Obama White House with his assertion on "State of the Union" that Obama changes to Bush anti-terrorism policies have made the American people less safe.

And that debate continues to echo in squabbling over the release of Bush-era memos written to justify harsh interrogation tactics and the debate over whether some independent commission should be named to explore whether laws were broken in the prior administration.

Looking at the Obama domestic agenda, conservative columnist David Brooks framed things this way in a recent column in The New York Times:

"If Republicans aren't nervous, they should be. Obama is arguing for his activist agenda not on the basis of class consciousness, which is alien to America, but as a defense of middle-class morality, which is central to it. Obama is positioning the Democrats as the party of order, responsibility and small town values. If he pulls this mantle away from the Republicans, it would be the greatest train robbery in American politics."

The second 100 days will be a critical test of Obama's agenda and, if you agree with the framing of the stakes provided by Brooks, an equally important period for his critics.

Consider two of the big issues front and center in the next phase:

• Will Americans view health care reform as Obama argues: an overdue moral imperative that requires forceful government action and a strong government hand in reorganizing the marketplace? Or will critics succeed, as they did when the Clinton health care push went off the rails in 1993-94, in framing the argument as too expensive, too powerful government reach into the most personal of our affairs?

• Can Obama sell a new energy and environmental approach that includes more government efficiency and emission mandates as a generational calling and national security necessity? Or will opponents sway the debate by warning that the end result is higher energy taxes on working- and middle-class households, and choking mandates that will undermine U.S. manufacturers in the competitive global economy?

There are many other challenges that are opportunities for Obama to advance his agenda and redefine his party as well as the United States image on the world stage. But several of these opportunities could also emerge as tripwires.

Iraq and Afghanistan are inherited tests. But Obama has placed such a heavy fingerprint on these policies that success will bring him credit, but setbacks will leave no doubt where the responsibility lies.

Likewise, overtures to Iran, Cuba and Venezuela put to the test Obama's bold campaign promise to give dialogue a chance even, perhaps especially, with those nations with whom U.S. relations had turned most stagnated or contentious.

Blaming George W. Bush was an easy -- and often credible -- foil for Obama in his important first 100 days.

Not so much in the defining second 100.