(CNN) -- No one's enthusiastic about torture, but Dick Cheney is back in the news, talking-up some pretty tough stuff. 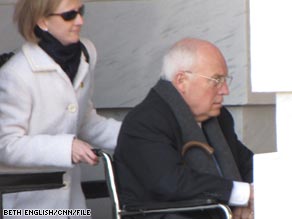 Cheney was a key figure in formulating the Bush administration's war on terror.

The former vice president, who said after the attacks of 9/11 that the United States would have to work on the "dark side" to protect itself, is coming forward to commend some controversial interrogation techniques.

"I know specifically of reports that I read," he told Fox News, "that lay out what we learned through the interrogation process and what the consequences were for the country."

Cheney's remarks come in the midst of a sudden national debate about how the U.S. has treated suspected terrorists.

They led to the revelation that one prisoner, alleged 9/11 mastermind Khalid Sheik Muhammed, was subjected to waterboarding (which simulates the sensation of being drowned) 183 times in a single month.

The U.S. army trains its own soldiers to resist punishing treatment but it bans the use of waterboarding on prisoners. Bush administration lawyers authorized it and several other techniques, for the CIA. The newly released memos were based on their work.

Cheney opposed making the memos public, but now he wants the Obama administration to release more of them.

"They didn't put out the memos that showed the success of the effort," he said.

Cheney isn't alone. Obama's own intelligence director wrote recently that "high value information came from interrogations in which those methods were used," though his office now says the negative aspects of the techniques outweighed any benefit.

Still, it's no accident that Cheney has decided to defend the policies. He was one of the most ardent advocates of the Bush administration's war on terror. By all accounts, the legal opinions underpinning it were influenced by his office.

Obama says that CIA interrogators who followed the instructions would not be prosecuted for their work, but this week, he left open the possibility of investigating and prosecuting the officials who "formulated the legal decisions."

The Obama administration hasn't completely made up its mind about the "dark side" of the war on terror. But Dick Cheney has.