Pentagon to release hundreds of photos of alleged abuse

WASHINGTON (CNN) -- The Pentagon will release hundreds of photographs showing alleged abuse of prisoners in detention in Iraq and Afghanistan between 2001 and 2006, Pentagon officials said Friday, but they said the photos did not show a systemic problem. 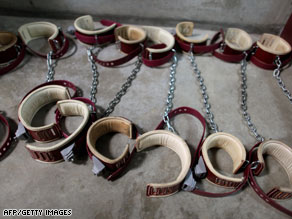 "I think it will be in the hundreds," said one official, who said the photos -- not yet seen by the public -- would be released by the end of May.

On Thursday, the American Civil Liberties Union said the Pentagon had agreed to release a "substantial" number of photographs by May 28 in response to an open-records lawsuit filed by the organization. Pentagon officials said the photos were taken at facilities other than Abu Ghraib prison in Iraq.

Friday, Pentagon officials said the photographs are from more than 60 criminal investigations from 2001 to 2006 and show military personnel allegedly abusing detainees.

But the officials rejected ACLU allegations that photos show a systemic pattern of abuse by the military.

The ACLU position was outlined by Amrit Singh, an ACLU attorney, who said, "These photographs provide visual proof that prisoner abuse by U.S. personnel was not aberrational but widespread, reaching far beyond the walls of Abu Ghraib."

But Pentagon spokesman Bryan Whitman countered that, "What this demonstrates is that we have always been serious about investigating credible allegations of abuse."

"The policy of the Department of Defense is to treat all prisoners humanely, and those who have violated that policy have been investigated and disciplined," Whitman said.

More than 400 individuals were disciplined over numerous investigations involving detainee abuse, according to Whitman. Punishments ranged from prison sentences to demotions and letters of reprimand, he said.

The Pentagon decided to release the pictures after two court cases went against the Defense Department, which wanted to prevent the images from being put into the public domain, according to Whitman.

"We felt this case had pretty much run its course," he said. "Legal options at this point had become pretty limited," Whitman said.

On Thursday, Secretary of Defense Robert Gates expressed concerns about the photo release, explaining that terrorist groups like al Qaeda could exploit the photos for such purpose as recruiting terrorists or inciting violence. But Gates admitted it was inevitable that much of the material would end up in the public domain.

"I think pretending that we could hold all of this and keep it all a secret even if we wanted to ... was probably unrealistic," Gates said Thursday while visiting the Marine Corps base at Camp Lejeune, North Carolina.