Editor's note: How would you rate the new Congress in President Obama's first 100 days? You'll get a chance to make your opinion known on at 7 p.m. ET Wednesday on the CNN National Report Card.

(CNN) -- It's early April, and President Obama is on his way to France with the nation's top diplomat at his side. As he and Secretary of State Hillary Clinton converse in a private room aboard Air Force One, a photographer peers through the half-open door and snaps a candid picture of the formerly bitter campaign rivals. 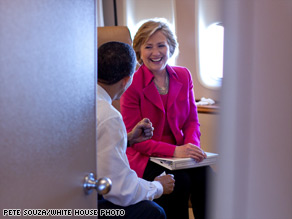 President Obama and Secretary of State Hillary Clinton share a conversation on board Air Force One.

Photographing two of the most powerful people in the country up-close and personal may seem like a once-in-a-lifetime opportunity to most Americans. But for photographer Pete Souza, it's a common occurrence.

"I try to photograph everything. Every meeting that the president does," Souza told CNN's John King on "State of the Union."

On leave of absence from his normal post as an assistant professor of photojournalism at Ohio University's School of Visual Communication, Souza is the chief official White House photographer for President Obama, meaning he has an all-access pass to the president's most intimate and private moments.

"I look at my job as a visual historian," Souza said on Sunday. "The most important thing is to create a good visual archive for history, so 50 or a hundred years from now, people can go back and look at all these pictures."

Watch Souza talk to CNN's John King about his work »

While he relishes his unobstructed seat to a historic administration, he knows his limits.

"I'm smart enough to know that if he's having a one-on-one meeting with a head of state, I let them have some privacy," he said. "I let him initiate any conversation. I am not there to take up his time in conversation."

Souza brings a unique perspective to the job, having also been the official White House photographer during Ronald Reagan's presidency. He acknowledged that Reagan was probably more formal, but told CNN he sees similarities between the two.

See some of Souza's photos »

"I think they're both comfortable with themselves, which makes them great photographic subjects. The presence of the camera in behind-the-scene situations didn't seem to bother either president, which is good for me," he said.

Souza released four never-before-seen photos on "State of the Union," including one of the president and the first lady sharing a moment on the dance floor at the annual Governor's Ball, the couple's first big event at the White House.

"Earth, Wind and Fire was the band and I think the president was singing along to the music. I think their intention is to bring some fun to the White House, too," Souza said while reflecting on the picture.

Previously a photographer for the Chicago Tribune, Souza began documenting Obama's ascension to the presidency in 2004 after a former colleague asked him to shoot the young politician's first year as a U.S. senator. Last year, Souza published "The Rise of Barack Obama," an extensive book of photos chronicling Obama's rise from junior senator of Illinois to the highest office in the country.

When asked to choose one picture as his favorite, Souza selected one of the president and first lady softly butting heads in a freight elevator, surrounded by staffers who appear to be avoiding eye contact with the couple. Michelle Obama is smiling playfully wearing her husband's jacket.

"I chose this one because it's a genuine moment. It was chilly in the elevator. He took his coat off, put it around his wife's shoulders and then there is this private moment going on between the two of them," he said. "It's just a complete storytelling picture."

Though the historic nature of Obama's presidency is not lost on Souza, he doesn't view Obama any differently than past commanders in chief.

All About Barack Obama • The White House