Truth comes to the U.S. Capitol

(CNN) -- After a nearly decade-long effort, the National Congress of Black Women on Tuesday honored Sojourner Truth by making her the first African-American woman to have a memorial bust in the U.S. Capitol. 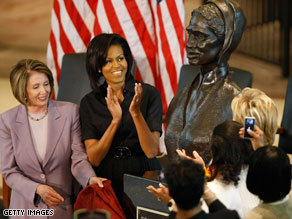 Truth, whose given name was Isabella Baumfree, was a slave who became one of the most respected abolitionists and women's rights activists.

"One could only imagine what Sojourner Truth, an outspoken, tell-it-like-it-is kind of woman ... what she would have to say about this incredible gathering," first lady Michelle Obama said at the Celebration of Truth ceremony. "We are all here because, as my husband says time and time again, we stand on the shoulders of giants like Sojourner Truth."

"And just as Susan B. Anthony, Elizabeth Cady Stanton and Lucretia Mott would be pleased to know that we have a woman serving as the speaker of the House of Representatives, I hope that Sojourner Truth would be proud to see me, a descendant of slaves, serving as the first lady of the United States of America," she said.

Along with musical performances, actress Cicely Tyson recited "Ain't I A Woman," Truth's famous 1851 speech to a women's rights convention.

Clinton and Rep. Sheila Jackson Lee, who worked together to draft legislation to commission the bust, were among speakers who paid tribute to the late C. Delores Tucker, former chairwoman of the NCBW, who spearheaded the effort for the Truth memorial.

"What a wonderful day it is to be here in Emancipation Hall for this great occasion when Sojourner Truth takes her rightful place alongside the heroes who have helped to shape our nation's history," Clinton said.

"Today, she takes her place in this Capitol, and we are the better for it," Clinton said. "She is a sojourner of truth, by truth, and for truth. And her words, her example and her legacy will never perish from this earth, so long as men and women stand up and say loudly and clearly, 'We hear you echoing down through the years of history. We believe that your journey is not yet over, and we will make the rest of that journey with you.' "

The bronze statue, which was crafted by Los Angeles, California, sculptor Artis Lane, will stand in Emancipation Hall at the Capitol Visitor Center.

"All the visitors in the U.S. Capitol will hear the story of brave women who endured the greatest of humanity's indignities. They'll hear the story of Sojourner Truth, who didn't allow those indignities to destroy her spirit, who fought for her own freedom and then used her powers ... to help others," Michelle Obama said.

In 1997, Congress passed a special act that called for relocating the Portrait Monument from the Capitol basement to the rotunda. The 7.5-ton statue depicts three leaders of the suffragette movement -- Anthony, Stanton and Mott.

A group called the Sojourner Truth Crusade was upset about the statue's relocation because it didn't incorporate Truth. After Congress agreed to go ahead with a move, advocates proposed commissioning a new statue that would include Truth.

In 2006, Congress passed a bill to honor the abolitionist with her own memorial.