WASHINGTON (CNN) -- Veteran Pennsylvania Sen. Arlen Specter switched from the Republican to the Democratic Party on Tuesday, saying he has found himself increasingly "at odds with the Republican philosophy." 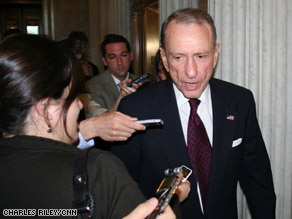 Sen. Arlen Specter was expected to face a tough re-election battle in 2010.

"This is a painful decision. I know I'm disappointing many of my colleagues," he said at a news conference announcing the move. "The disappointment runs in both directions.

"I'm putting principle at the top of the list," he added.

The switch puts Senate Democrats one vote shy of a filibuster-proof majority of 60 seats. They can reach the 60-seat mark if Al Franken holds his current lead in the disputed Minnesota Senate race.

Specter, a five-term Senate veteran, was facing what most political observers believed would have been a tough fight for the Pennsylvania GOP Senate nomination in 2010.

Specter said President Obama and Senate Majority Leader Harry Reid would campaign for him as he runs for re-election -- now on the Democratic ticket -- in the 2010 race.

Obama called Specter shortly after learning the news during his daily economic briefing in the Oval Office on Tuesday morning, according to a senior administration official.

"You have my full support, and we're thrilled to have you," Obama told Specter.

"Sen. Specter and I have had a long dialogue about his place in an evolving Republican Party," Reid, D-Nevada, said in a written statement.

"We have not always agreed on every issue, but [he] has shown a willingness to work in a bipartisan manner, put people over party and do what is right for Pennsylvanians and all Americans."

Reid called Specter a "man of honor and integrity" who would be welcome in the Democratic caucus.

One key Senate Democrat warned that reaching the 60-vote mark would not automatically ensure a Democratic victory on every major issue.

"It's great news," North Dakota Sen. Kent Conrad said. But it means "a lot less" than some people think.

Neither party has had a filibuster-proof majority in the U.S. Senate since the 95th Congress, from 1977 to 1979. The Democrats controlled 62 seats during the first two years of the Carter presidency.

Learn about other senators who have switched parties »

Republican National Committee Chairman Michael Steele ripped Specter, calling him a Republican in name only who was out of step with the rest of the party because of his "left-wing voting record."

"Some in the Republican Party are happy about this. I am not," Steele said in a written statement. "Let's be honest -- Sen. Specter didn't leave the GOP based on principles of any kind. He left to further his personal political interests because he knew that he was going to lose a Republican primary due to his left-wing voting record."

Steele later said Specter essentially "flipped the bird" at the GOP leadership with his decision.

Speaking to CNN's Gloria Borger and Kyra Philips, the chairman said it was "not only disrespectful but downright rude" of Specter to make this decision after the national party made it clear that it would stand behind him in a contentious primary fight.

National Republican Senatorial Committee Chairman John "Cornyn went out on the line for this man," he said. "For the senator to flip the bird back to Sen. Cornyn and the Republican Senate Leadership, a team that stood by him, who went to the bat for him in 2004, to save his hide is not only disrespectful but down right rude.

"I'm sure his mama didn't raise him this way," Steele added.

Specter was expected to face a very tough primary challenge in 2010 from former Rep. Pat Toomey, who nearly defeated Specter in the Pennsylvania GOP Senate primary in 2004.

Watch why Specter decided to switch »

A separate Franklin & Marshall survey showed Specter leading Toomey 33 to 18 percent. Another 42 percent, however, were undecided.

More than half of the Republicans polled in the Franklin & Marshall survey said they would prefer to see someone new in the Senate.

Specter singled out the conservative group Club for Growth, which endorsed Toomey in 2004 and has endorsed him for 2010, as one the primary culprits behind his increasing political isolation in the Pennsylvania GOP.

He argued that the organization, which targets moderate GOP incumbents who do not adhere to the doctrine of supply-side economics, had helped undermine the competitiveness of the Republican Party across much of the country.

Club for Growth members and other conservatives "don't make any bones about their willingness to lose the general election if they can purify the party," he said.

But Club for Growth President Chris Chocola replied in a statement, "Sen. Specter has confirmed what we already knew: He's a liberal devoted to more spending, more bailouts and less economic freedom. Thanks to him, Democrats will now be able to steamroll their big government agenda through the Senate.

"This cynical play for political survival calls into question whether Pennsylvania taxpayers can believe anything Arlen Specter says."

Numerous Republicans are angry with Specter over his recent vote in support of President Obama's $787 billion stimulus plan.

"When the stimulus package came up for a vote, I felt that it was indispensable to vote aye in order to avoid the possibility of a 1929-type depression," Specter said. He said that the vote highlighted a "schism" and an "irreconcilable conflict" between himself and the bulk of the GOP.

Specter, one of only three GOP senators to vote for the measure, has been part of a dwindling group of GOP moderates from the northeastern part of the country.

The 79-year-old Kansas native and former Philadelphia district attorney has been a leading Republican on the Senate Judiciary Committee for much of the past two decades, serving as its chairman from 2005 to 2007.

Specter has been a defender of abortion rights in an overwhelmingly anti-abortion party and opposed Reagan's controversial nomination of Robert Bork to a Supreme Court seat in 1987.

But he drew criticism from many women for his aggressive questioning of law professor Anita Hill, who accused Supreme Court nominee Clarence Thomas of sexual harassment during Thomas' 1991 confirmation hearings.

Specter served on the Warren Commission, which investigated the 1963 assassination of President Kennedy, helping develop the so-called single bullet theory that Kennedy and Texas Gov. John Connally were hit by the same slug.

He has survived bouts with cancer three times, most recently undergoing chemotherapy for Hodgkin's disease in 2005.

CNN's Ed Hornick and Deirdre Walsh contributed to this report.

All About Arlen Specter • U.S. Senate