(CNN) -- President Obama said Wednesday that he's under no illusions that he'll have a "rubber-stamp Senate" now that Sen. Arlen Specter has switched parties to join the Democrats. 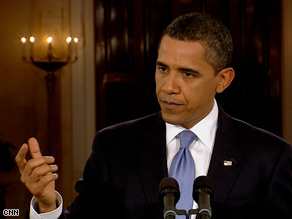 President Obama speaks on the 100th day of his administration.

"To my Republican friends, I want them to realize that me reaching out to them has been genuine," Obama said at a prime time news conference capping his 100th day in office.

"I can't sort of define bipartisanship as simply being willing to accept certain theories of theirs that we tried for eight years and didn't work and the American people voted to change."

Specter on Tuesday announced he was changing parties, saying he's found himself increasingly "at odds with the Republican philosophy." He also admitted Wednesday he was worried about the prospects of facing a Republican primary in order to keep his seat next year.

As if to prove the president's point, Specter voted against Obama's budget plan shortly before the news conference.

Asked if the GOP is in desperate straits, Obama said, "Politics in America changes very quick. And I'm a big believer that things are never as good as they seem and never as bad as they seem."

Watch what Obama says about working with Republicans »

Obama has faced criticism from Republicans that he hasn't been reaching across the aisle. His budget moved through both chambers of Congress on Wednesday with no GOP support, and his economic stimulus plan passed with just three Republican votes from the Senate. iReport.com: Your thoughts on Obama's speech and first 100 days

The president said he thinks the administration has taken steps to restore confidence in the American people, noting that "simply opposing our approach on every front is probably not a good political strategy."

In his first 100 days, he's been "sobered by the fact that change in Washington comes slow," said Obama.

Watch Obama discuss what's surprised him in the first 100 days »

"That there is still a certain quotient of political posturing and bickering that takes place even when we're in the middle of really big crises," he said, adding that he'd like for everyone to say "let's take a time-out on some of the political games."

In a shift from his previous news conferences which were dominated by questions about the economy, Obama fielded multiple queries on the foreign policy front.

The president said a recent uptick in violence in Iraq won't affect his plan for a phased military withdrawal.

"Civilian deaths, incidents of bombings ... remain very low relative to what was going on last year," Obama said. "You haven't seen the kinds of huge spikes that you were seeing for a time. The political system is holding and functioning in Iraq."

Obama said more details need to be nailed down before U.S. troops leave Iraq -- including how oil revenues will be divided, what the powers of provincial governments there will be and the political relationships between minority Kurds, Sunnis and Shiites -- including the armed Sons of Iraq groups.

On Pakistan, the president said the United States has "huge national security interests in making sure that Pakistan is stable" and doesn't end up a "nuclear-armed militant state."

"I am gravely concerned about the situation in Pakistan, not because I think that they're immediately going to be overrun and the Taliban would take over in Pakistan. I'm more concerned that the civilian government there right now is very fragile and don't seem to have the capacity to deliver basic services," he said.

Obama also said Wednesday he is "very comfortable" with his decision to ban interrogation techniques like waterboarding, which he called torture.

Watch what Obama says about torture »

"Churchill understood that if you start taking shortcuts, over time that corrodes what's best in a people," Obama said. "It corrodes the character of a country."

Asked about the previous administration, he said, "I think that whatever legal rationale were used, it was a mistake."

On the recent outbreaks of swine flu, Obama insisted his administration is "prepared to do whatever it takes to control the impact of the virus."

"I've asked every American to take the same steps you would take to prevent any other flu: Keep your hands washed; cover your mouth when you cough; stay home from work if you're sick; and keep your children home from school if they're sick," he said.

Obama downplayed the possibility of closing the border with Mexico as a way to control the virus, also known by its clinical name of H1N1.

Watch as Obama warns Americans about the flu »

"It would be akin to closing the barn door after the horses are out," Obama said.

The first cases of the virus were detected in Mexico, where health officials suspect swine flu in more than 150 other deaths and roughly 2,500 illnesses. Only 26 cases have so far been confirmed, including the seven fatal cases.

So far, the World Health Organization has reported 148 cases in nine countries.

Obama said the $1.5 billion he asked from Congress to help fight the outbreaks will help government health officials monitor and track the virus and replenish the supply of antiviral drugs.

On immigration, Obama said he wants to work with members of Congress, including former Republican presidential rival Sen. John McCain, to revive efforts to reform the system.

Obama said he hopes lawmakers will begin working on such reform legislation and expects the process to be under way within the year.

Both Obama and McCain supported an ultimately failed plan backed by then-President Bush that would have fined illegal immigrants living in the United States but provided a pathway to citizenship for some.

The measure approves most of Obama's key spending priorities and sets the federal government in a new direction with major increases for energy, education and health care programs.

Obama said his budget begins to lay a "new foundation" that will strengthen the U.S. economy.

"But even as we clear away the wreckage of this recession, I've also said that we can't go back to an economy that is built on a pile of sand -- on inflated home prices and maxed-out credit cards; on overleveraged banks and outdated regulations that allowed the recklessness of a few to threaten the prosperity of all," he said.

The United States "will see a better day," but there's still a lot of work to do, he said.

"I want to thank the American people for their support and their patience during these trying times, and I look forward to working with you in the next hundred days, in the hundred days after that, all of the hundreds of days to follow, to make sure that this country is what it can be."