ARNOLD, Missouri (CNN) -- On his 100th day in office, President Obama said Wednesday that he was "pleased with the progress we've made but not satisfied." 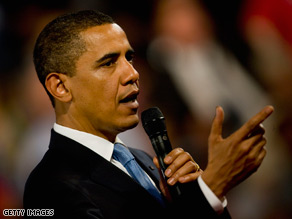 Obama marked his 100th day in office Wednesday with a town hall meeting and later a news conference.

"I've come back to report to you, the American people, that we have begun to pick ourselves up and dust ourselves off, and we've begun the work of remaking America," the president said at a town hall meeting in a high school gymnasium in Arnold, a St. Louis suburb.

"I'm confident in the future, but not I'm not content with the present," he said. "You know the progress comes from hard choices and hard work, not miracles. I'm not a miracle worker," he said.

Obama acknowledged challenges of "unprecedented size and scope," including the recession. These challenges, he said, could not be met with "half measures."

"They demand action that is bold and sustained. They call on us to clear away the wreckage of a painful recession, But also, at the same time, lay the building blocks for a new prosperity. And that's the work that we've begun over these first 100 days," he said.

He responded to critics who say he is trying to do too much as he works to address the recession as well as health care, energy and education.

"There's no mystery to what we've done; the priorities that we've acted upon were the things that we said we'd do during the campaign," he said, prompting loud applause.

The president made an opening statement that lasted about 20 minutes before taking questions from the audience. The last question was from a fourth-grade girl who asked about the administration's environmental policies.

Later Wednesday, Obama will hold a prime-time news conference in the East Room of the White House.

Leading up to the date, White House aides had labeled the 100th day as a "Hallmark" holiday.

"They don't mean anything," quipped one aide, "but you have to observe them."

More than six in 10 Americans approve of the job Obama is doing as president, a recent poll of polls shows.

According to a CNN Poll of Polls compiled early Wednesday, 63 percent say they approve of how Obama is handling his duties.

All About Barack Obama • Missouri