Pelosi to Republican voters: 'Take back your party' 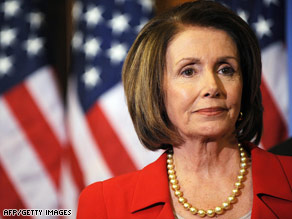 The California Democrat offered her own analysis of the political environment for her political opponents, asserting Republicans across the country are more willing to work with Democrats than their leaders on Capitol Hill.

"Yes, there is -- shall we say -- a 'radical right-wing' element with whom they identify. But by and large, I say to Republicans in America: Take back your party. The party of protecting the environment. The party of individual rights. The party of fairness. This is not the Grand Old Party."

Pelosi concluded her long riff about the GOP by saying, "Our country needs a strong, diverse Republican Party." Without missing a beat, Senate Majority Leader Harry Reid chimed in, saying "not too strong."

As Pelosi, Reid and other Democratic leaders ticked off a list of legislative accomplishments passed largely without Republican support, the speaker insisted she's tried to reach out to Republicans in Congress, but said it hasn't been easy.

Republicans in the House of Representatives "are difficult to deal with, let's put it that way," she said.