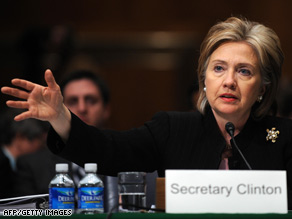 Secretary of State Hillary Clinton says the U.S. mustn't "turn our backs on countries in our own hemisphere."

In wide-ranging comments on the region, she also said the Obama administration will work to improve relations among even its harshest critics in the Western Hemisphere, including Venezuelan President Hugo Chavez, and is looking to the Castro brothers in Cuba for some reciprocal action in response to the president's easing of travel and other restrictions.

Efforts by the Bush administration to isolate certain Latin American leaders had failed, she said, and the United States now must work to counter efforts by China, Iran and Russia to gain influence there.

"What we are doing hasn't worked very well and in fact, if you look at the gains, particularly in Latin American, that Iran is making and China is making, it is quite disturbing," Clinton said at a town hall meeting at the State Department with senior Foreign Service Officers.

"They are building very strong economic and political connections with a lot these leaders. I don't think that is in our interests," she said.

"We have no guarantees here that we can create a better relationship with someone who has a different view of politics, the economy and so much else. But we think it is worth trying to just explore this and see what comes of it," Clinton said.

"I have to say that I don't think -- in today's world that is a multipolar world where we are competing for attention and relationships with at least the Russians, the Chinese, the Iranians -- that it is in our interests to turn our backs on countries in our own hemisphere."

She pointed to a large Iranian presence in the Nicaraguan capital, Managua, as an example of what other countries are doing in Central and South America.

"We are looking at how to deal with [Nicaraguan President Daniel] Ortega," she said. "The Iranians are building a huge embassy in Managua. You can only imagine what it's for."

Clinton's voice was hoarse, she coughed occasionally and seemed to be nursing a cold, but she made no mention of her health.

On Cuba, Clinton said the United States is awaiting a response from Cuban leaders Raúl and Fidel Castro.

"We would like to see some reciprocity from the Castros on political prisoners, human rights and other matters," she said. "So we are looking at a number of different relationships and trying to figure out whether we can be more productive. My bottom line is what's best for America, how do we try to influence behavior that is more in our interest than not."

Later, Clinton appeared to be fighting back tears when she spoke at a ceremony to honor Foreign Service officers who had been killed in the line of duty.

She spoke about 25-year-old Brian Adkins, who was just beginning his State Department career when he was murdered this year in Ethiopia.

"Please know how grateful we are for his selflessness and service to his country," Clinton said.

Adkins' name and those of three other Foreign Service officers were added to a plaque in the State Department entrance.