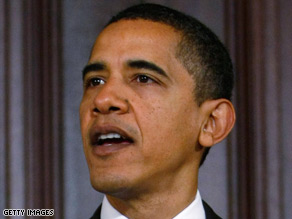 The White House aims at companies that use loopholes in the law that allow them to legally avoid paying taxes.

Senior administration officials briefed reporters Sunday evening in a conference call ahead of the announcement that will be made by President Obama and Treasury Secretary Tim Geithner.

The two components of the president's plan include reforms that ensure the tax code does not handicap companies seeking to create jobs at home, as well as reforms that reduce the amount of tax revenue lost to tax havens.

The White House is targeting companies that use loopholes in the law that allow them to legally avoid paying billions in taxes. It also focuses on wealthy individuals who break the law by creating hidden overseas accounts.

The Obama administration plans to raise $103.1 billion by removing tax advantages for investing overseas and will use that money to help make a tax credit permanent, the officials said. The administration also hopes to raise $95.2 billion over the next 10 years by cracking down on overseas tax havens.

The White House, under the plan, would eliminate the "check-the-box" provision which allows corporations to designate overseas subsidiaries as branches of the company, not subjected to taxes. This tax loophole enables companies to avoid paying U.S. taxes.

One senior administration official said it has cost the U.S. government $86.5 billion over 10 years and is "the most unjustified loophole in the international tax system which needs to close down." It is a legal practice, the officials said, involving "companies taking advantage of a very bad law."

The White House will announce the changes as part of the administration's budget. The plans include theInternal Revenue Service hiring almost 800 employees, who would be devoted to cracking down on overseas tax abuse.

The administration expects these initiatives to raise at least $210 billion over the next 10 years "to cut taxes for American families, increase incentives for businesses to create jobs in America and reduce the deficit."

When asked about the intense lobbying effort already underway against these reforms, including 200 opposition letters sent to Congress, a senior administration official said, "We expect many lobbying against us ... "